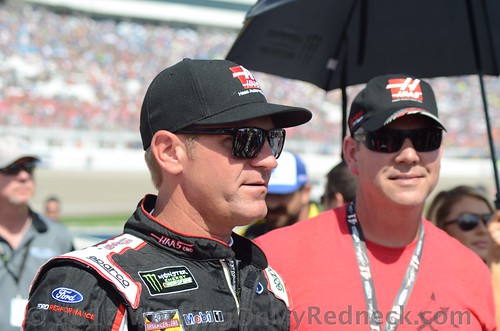 After finishing second Monday afternoon at Bristol Motor Speedway, one of the first people Clint Bowyer sought out on pit lane was Stewart-Haas Racing (SHR) teammate and friend Kevin Harvick, who finished third.

Congratulating each other after a good race was like old times for the pair. They have history.

Bowyer leaned on Harvick’s driving knowledge when he started his NASCAR career at Richard Childress Racing in 2005. The Emporia, Kansas native was new to the sport and Harvick was already winning races on a regular basis. Instead of reinventing the wheel, Bowyer quickly figured out it might be easier and wiser just to mimic what seemed to work well for Harvick both on and off the track.

“Everything I have learned in this sport of racing and racecars was always in his seat, with his pedals and where his steering wheel was,” Bowyer said. “Kevin always had it and I didn’t know any better. I had never driven one of these cars before. Everything I did when I learned how to drive these cars was how Kevin did it.”

It seemed to work.

At Childress, Bowyer started 217 Cup Series races, earning five victories and posting 31 top-five finishes. In the Xfinity Series races, he notched eight victories, including the 2008 series title. Bowyer and Harvick, who ultimately won 23 races at Childress, were not only friends but teammates who knew if one outran the other, then it was likely a good day. But those days came to an end when Bowyer left the team and joined Michael Waltrip Racing before the 2012 season and Harvick joined SHR in 2014.

SHR put the band back together when it announced Bowyer would take over the No. 14 vacated by three-time champion Tony Stewart, who retired from NASCAR competition after the 2016 season. Bowyer had some big shoes to fill in replacing a legend in Stewart, so he found a familiar friend to lean on for guidance.

“When I came to Stewart-Haas, they asked what I want to do with my pedals and seat and I said, ‘Hell, I don’t know, ask Kevin,’ Bowyer said. “It has been that way my whole career.”

Bowyer and Harvick are tied for eighth in the series standings and look to be contenders for the Cup Series title this season. Harvick seems to relish in his teammate’s success.

“I watched him drive his first stock car at RCR and, from that point on, he progressively learned and listened and brought a lot to the table as a driver,” Harvick said. “And we are good friends, which is something you can’t really buy. You either get along with somebody or you don’t. You communicate and drive like them or you don’t. It has been refreshing and fun to have him there and seeing him progress.”

Harvick isn’t Bowyer’s only resource. Bowyer said he values both SHR teammates Danica Patrick and Kurt Busch. Plus, there is always Stewart.

“Danica brings so much to SHR through her open-wheel experience and what she does away from the track,” Bowyer said. “Kurt really dissects his car more than anything I have ever heard. It really gets your mind going about maybe what you thought, or a trick somewhere. Makes you think about what maybe you were feeling when you thought you were feeling about something else. It’s a breath of fresh air to be in the meetings with those guys and debrief with them and work on the next week, or even just the race after practice.

“It is really cool to have those guys’ input going into a race, or the following week. What can I say about Tony except he’s one of the greatest drivers in the history of motorsports. Add in all the competition guys and you realize there’s a lot of brainpower at SHR. Gene Haas and Tony have built a really great racing organization.”

This week, Bowyer and his No. 14 Haas Automation Ford team led by crew chief Mike Bugarewicz, who was Harvick’s engineer before moving to the No. 14 team, visit Richmond (Va.) International Raceway for Sunday’s 400-lap race. Two of Bowyer’s eight career victories came at the .75-mile oval – in September 2015 and May 2008. He’s also notched four top-fives and led 348 laps there.

Bowyer would like nothing better than to visit victory lane again at Richmond. If he does, Harvick might be one of the first to come by victory lane or send a congratulatory text message.