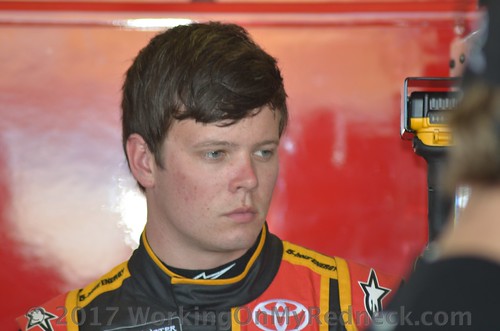 Continuing their partnership with Erik Jones, GameStop is taking the leap to NASCAR Cup Series competition sponsoring Jones for two races this season on the No. 77 Toyota Camry with Furniture Row Racing. GameStop kicks off their Cup Series venture this weekend at Richmond International Raceway and again at Pocono Raceway on June 11, 2017.

“GameStop has been a great partner for me and one of the first sponsors to come on board with me when I started running in the XFINITY Series,” said Jones. “It’s really cool to see them grow and move up to the Cup Series with me on the 77 team. We’ve gotten several wins together in the XFINITY Series, including one a few weeks ago at Texas. I’m excited to represent GameStop and their partners in the Cup Series and look forward to having the same success we’ve seen together over the last few years.”

Since partnering with Jones in 2015, GameStop has been present for several career milestones for Jones in the NASCAR XFINITY Series (NXS). In 2015 at Auto Club Speedway, Jones scored his first-career NXS pole before finishing third the in the race. The following week at Texas Motor Speedway, Jones earned the pole and his first-career NXS victory. Since joining the XFINITY series, Jones has taken GameStop to victory lane three times and while carrying the GameStop brands, has earned seven poles, 15 top-five finishes and 17 top-10 finishes.

Erik Jones: “After having such a strong Camry last weekend at Bristol, I am definitely ready to get back to the track this weekend at Richmond. Richmond is another short track and short tracks have always been good tracks for me. I’ve run Richmond a few times in the XFINITY Series and always run well and even came close to getting a win last fall. The 77 Camry has been fast all year and I know this weekend will be no different. Everyone on the 77 team is ready for the finishes we deserve, we just need a little luck to finish races where we run early on and throughout the day. If we can put all the pieces together, we should be able to run up front and contend for a top five again this weekend in the No. 77 GameStop Prey Toyota Camry.”