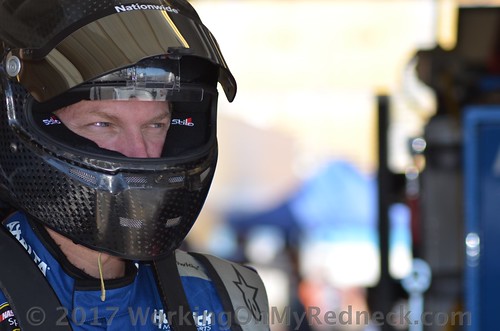 More than anything, Dale Earnhardt Jr. wanted to be the master of his own destiny.

In announcing his retirement from Monster Energy NASCAR Cup Series racing on Tuesday at the Hendrick Motorsports campus in Charlotte, North Carolina, Earnhardt described his primary motivation during months of physically and emotionally exhausting rehabilitation from a concussion that sidelined him from the final 18 races of the 2016 season.

Earnhardt said his hiatus from racing gave him “the time to wrestle back some semblance of say-so in this whole matter.”

“So that became my motivation, the opportunity to stand here at this podium to announce my choice, rather than some fate that was decided for me. In that regard, the race car wasn’t my goal. It was simply the vehicle that got me here today.”

Earnhardt said his most difficult conversation he had was with team owner Rick Hendrick, whom Earnhardt told of his planned retirement on March 29. He thanked Hendrick profusely, along with wife Amy Reimann (whom Earnhardt married in December), sister Kelley Earnhardt Miller (his partner at JR Motorsports), crew chief Greg Ives and the entire No. 88 team and the fans who collectively comprise Junior Nation.

“I’ll miss that camaraderie, and I’ll miss it for the rest of my life,” Earnhardt said of his relationships with his team and within the sport. “But the friendships I’ve made will live beyond the time that was spent in the garage together…

“I also want to thank NASCAR for giving me and a lot of other fortunate people a place to race. I’ve never taken that for granted.”

Earnhardt was quick to remind reporters that his career isn’t over yet. He will finish the season in the Monster Energy NASCAR Cup Series car, and he still has two NASCAR XFINITY Series races on the books for 2018.

“I’m going to be in Richmond this weekend with my foot on the floor, going down the straightaway, and this press conference will be a distant memory,” said Earnhardt, who said his love for driving race cars remains undiminished, despite Tuesday’s announcement.

Throughout a career that spanned parts of 19 seasons and more than 600 races in the Monster Energy NASCAR Cup Series, Earnhardt claimed 26 wins, including two Daytona 500 victories. He came close to winning the championship on several occasions, finishing in the top five in points four times. Prior to joining NASCAR’s premier series, Earnhardt won consecutive titles in what is now the NASCAR XFINITY Series in 1998-99.

“Dale Earnhardt Jr. is among the most recognizable athletes in the world, unequivocally serving as the sport’s most popular driver for more than a decade,” NASCAR Chairman & CEO Brian France said. “His passion for the sport will leave an impact on NASCAR that will be felt over its entire history. Over his 20-plus year career, Dale has proven himself a leader with a deep commitment to so many areas of the sport – all the way to its roots. We’re excited about the next chapter of his NASCAR career and wish him success for the remainder of 2017.”

While driving, Earnhardt set himself up for the future, starting his own race team, which competes in the NASCAR XFINITY Series. His teams have won 32 times, and captured the 2014 championship with Chase Elliott – who many believe will assume the crown as NASCAR’s most popular driver.

But Earnhardt’s immense legacy will lie in the relationship he forged with millions of NASCAR fans. Even during the leanest of years, from a performance standpoint, Earnhardt’s bond with his fans secured him the Most Popular Driver Award following each of the last 14 seasons, which is a NASCAR record for continuous receipt of the honor.

The expressions of the respect Earnhardt has earned from his peers on amounted to a deluge on social media, once his plans became public.

Tweeted teammate and seven-time champion Jimmie Johnson, “You’re a hell of friend and teammate @DaleJr, I’m really happy for you and [wife] @AmyEarnhardt.”

Tony Stewart, who retired following the 2016 season, tweeted, “I’m proud of my great friend @DaleJr for everything he’s done for this sport. I’m even more proud of who he is as a man. Love you friend.”

Earnhardt, who will turn 43 in October, made his first career Monster Energy Series start on May 30, 1999, at Charlotte Motor Speedway.

Since then, Earnhardt has experienced the sport’s extreme highs and lows. In the 2001 Daytona 500, he lost his father, Dale Earnhardt, following a last lap wreck. The next time the series raced at Daytona, Earnhardt Jr. won, driving the No. 8 Dale Earnhardt Inc. Chevrolet. In 2012, Earnhardt missed two races due to a concussion, but came back two win a combined seven races in 2014-15.

The last of his 26 victories came in the November race at Phoenix in 2015. Then came the season-ending concussion in 2016 and the rigorous rehab regimen Earnhardt had to follow to get back into a race car.

It was that perseverance that endeared him to millions of fans, and earned him the respect of those closest to him.

Tweeted his wife, Amy: “I’m so proud of Dale for working so hard to get back and even prouder of his courage and self-awareness to make the decision to retire. I’m sure God has many other great plans for him and us!”