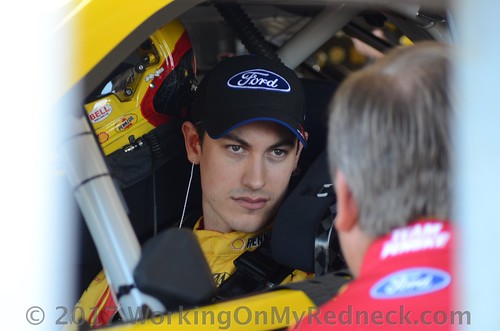 Recap: Brad Keselowski and the No. 2 Miller Lite Ford Fusion sludged their way through a tough afternoon in the rain-delayed Food City 500 at Bristol Motor Speedway on Monday, finishing a disappointing 34th.  Qualifying for the 500-lap Monster Energy NASCAR Cup Series event was rained out, meaning Keselowski started the race in the fourth position based on points.  The Miller Lite Ford Fusion was fast early the race, but was quickly fighting a tight center, loose off condition.  However, as the first came to an end, Keselowski started to report troubles with his power steering, which was beginning to have a negative effect on the handle of his car.  The problem continued to get worse as Keselowski tried different lines around the track to help improve the handling on the Miller Lite Ford.  After finishing the first stage in the 17th position and the second stage in the 22nd position, Keselowski fell victim to a loose wheel and had to make an unscheduled pit stop.  Just a few laps later, the power steering issues got the best of the Miller Lite Ford and crew chief Paul Wolfe called Keselowski to bring the car behind the wall.  The team made repairs, but lost 60 laps in the process.  Keselowski eventually finished 34th and dropped one position in the point standings to fifth.

Quote:  “It just wasn’t the run we wanted or needed with the Miller Lite Ford Fusion.  I don’t know what happened exactly.  We had a few different issues, one of which was with the power steering, I think the same problem the 21 car had.  I just couldn’t drive it so we had to take it behind the wall.  It’s a frustrating end of the race for sure.”

Recap:  Joey Logano continued his run of consistency in the early stages of the 2017 Monster Energy NASCAR Cup Series Season by finishing fifth in the No. 22 Autotrader Ford Fusion on Monday afternoon at Bristol Motor Speedway. After a race weekend plagued by rain in which qualifying was cancelled and the race way delayed 24 hours, Logano and the No. 22 team started the race in the fifth position. As predicted, the inside line proved to be disadvantageous on the initial start and Logano quickly dropped to the back of the top-10. As the opening run went on, the team began to pick up positions before the first pit stop of the race at lap 59. Crew chief Todd Gordon called for air pressure and wedge adjustments on the No. 22 Autotrader Ford. By the end of the first stage, Logano had worked his way back to the fourth position, earning seven stage points. The team would again adjust the handling of the Ford using air pressure, and Logano raced his way to the second position before the close of the second stage, earning nine more stage points. The handling of the No. 22 Autotrader Ford continued to improve, enough so that Logano, aided by a fast pit stop from the team was able to lay claim to the lead. The team led five times for a total of 72 laps on the afternoon. Logano continued to battle inside the top-five for the majority of the closing 100 laps, despite slipping in the final 40 laps before rallying back to the fifth position. The solid performance marked the fifth top-five and seventh top-10 in the first eight races of the season, and moved Logano into the fourth position in the MENCS point standings.

Quote:  “Yeah, we weren’t a restarter today. Kind of non-typical for the 22. It’s usually a short-run speed car. I started out hitting the splitter, up the race track, I was all over the place. I couldn’t even retain the lead when we had it. That probably cost us the race when we lost the lead to the 48. Good long run car, just didn’t have enough long runs. We have another top five, I think that’s four straight. We got some good stage points which we haven’t done all year. I just want to win when we come to this race track.”