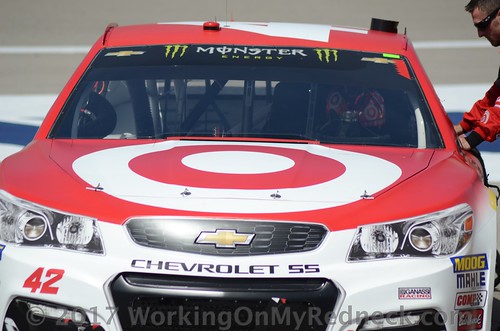 For the third time this season, Kyle Larson will start a Monster Energy NASCAR Cup Series race from the pole.

And for the second time this year, he gained the top starting spot not through qualifying in time trials, but with an assist from Mother Nature.

Because of intermittent rain at Bristol Motor Speedway, NASCAR canceled qualifying in favor of necessary practice for teams in the Cup, XFINITY and K&N Pro Series East Series.

With the field for Sunday’s Food City 500 ordered according to owner points, Larson will start up front as the series leader, with second-place Chase Elliott beside him. Those are familiar positions for both drivers, who started in the same spots when rain wiped out qualifying for the April 2 race at Martinsville.

Interestingly, Larson posted his worst finish of the season in that race — 17th. Otherwise, in the six events since he ran 12th in the season-opening Daytona 500, the driver of the No. 42 Chip Ganassi Racing Chevrolet has a victory from the pole at Fontana, California, and four second-place finishes.

Elliott, on the other hand, finished third at Martinsville, matching his best result of the season.

Keselowski is the only two-time winner this season, having gone to Victory Lane at both Atlanta and Martinsville.