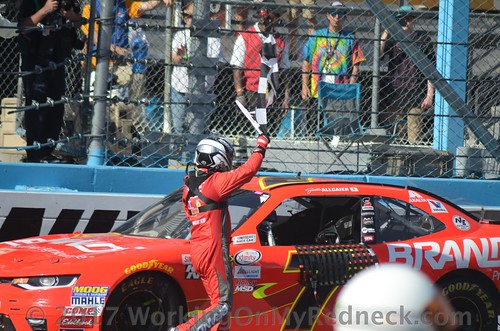 Returning this weekend at Bristol Motor Speedway for its second installment of the 2017 season is the NASCAR XFINITY Series Dash 4 Cash program. Justin Allgaier took home the first Dash 4 Cash win and the gigantic payload ($100K) earlier this season at Phoenix International Raceway. If Allgaier can win the Dash 4 Cash at the next three scheduled events (Bristol Motor Speedway, Richmond International Raceway and Dover International Speedway) he will not only bring home a total of $400,000 in winnings, but XFINITY will also tack on an additional $600,000 to bring Allgaier’s Dash 4 Cash win total to a cool million dollars.

But, before Allgaier becomes a millionaire, he will need to win the Dash 4 Cash at Bristol this weekend. The Riverton, Illinois native has made 12 starts at Bristol, posting his first career NASCAR XFINITY Series win (2010), five top fives, seven top 10s and an average finish of 12.7. In his last four starts at Bristol, he has finished in the top-10; including a runner-up finish last fall. Justin Allgaier has won the last two consecutive Dash 4 Cash events dating back to 2016 – Indianapolis last season and Phoenix a few weeks back.

It will be interesting to see if Justin Allgaier can back up his Dash 4 Cash win at Phoenix with another Dash 4 Cash victory at Bristol!