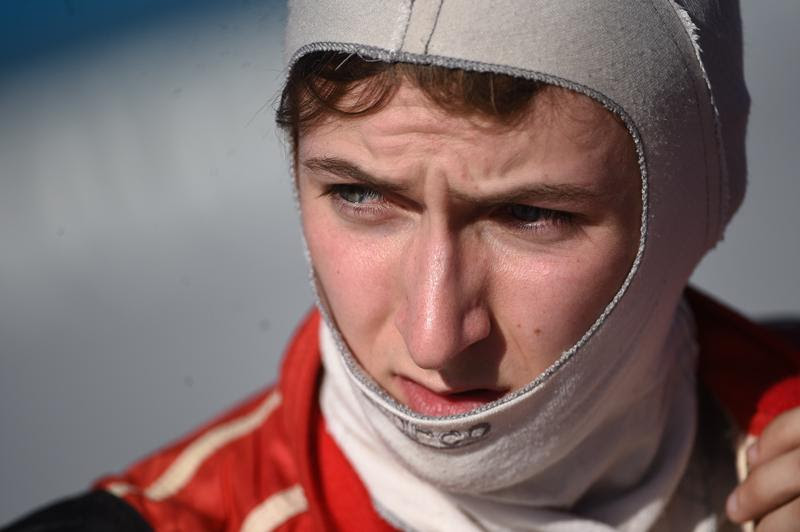 Ed Carpenter Racing announced today that Zach Veach will fill in for the injured JR Hildebrand in this weekend’s Verizon IndyCar Series race at Barber Motorsports Park. Veach will drive Hildebrand’s No. 21 Fuzzy’s Ultra Premium Vodka Chevrolet in the 2017 Honda Indy Grand Prix of Alabama while Hildebrand rests his hand.

A bone in Hildebrand’s left hand was broken on Sunday, April 9 in a final-lap incident during the Toyota Grand Prix of Long Beach. The break in the 29-year-old’s hand required surgery, performed on Tuesday, April 11 at the Indiana Hand to Shoulder Center in Indianapolis.

“This obviously is not how I had hoped this would play out, but I’ve done everything there was to do since surgery last Tuesday with good results. It seems the risk is still too high given the initial extent of the injury,” stated Hildebrand. “The doctors I’ve worked with have been awesome to get my fractures sorted out and I trust their view of the situation.”

“I’m disappointed for the team to be out this weekend, but am looking forward to doing everything I can at Barber to help continue the progress we’ve made so far this year. I am continuing to rehab with maximum focus to be back in the saddle for Phoenix,” Hildebrand continued.

Ed Carpenter Racing continues a pattern of seeking out young American talent by giving the nod to Veach. The 22-year-old will be making his Verizon IndyCar Series debut this weekend. As fate would have it, the first Indy car Veach drove was the No. 21 in an Indy Lights Series Driver Test day at Sonoma Raceway in September 2016. He has six Indy Lights wins, including three last season on his way to a third place finish in the championship. The Stockdale, Ohio native has already been confirmed to drive in this year’s Indianapolis 500 for fellow Chevrolet-powered team AJ Foyt Racing.

“First and foremost, my thoughts are with JR and his recovery, that’s the most important part of this!” Veach said. “My heart goes out to him as I suffered a broken hand a couple years ago and I wouldn’t wish that upon anyone. This isn’t how any driver wants to get his first race but with that said, I’m extremely thankful for the opportunity to sub for JR.”

“Ed (Carpenter) gave me my first chance to test an Indy car a few months ago. It’s going to be very special for me to be back in that same car representing Fuzzy’s Vodka at Barber,” continued Veach. “It’s going to be a lot to take in in a short amount of time, but I’m really excited to do the best I can for the team, as well as JR!”

Veach will be joined by teammate Spencer Pigot, road and street course driver of the No. 20 Fuzzy’s Ultra Premium Vodka Chevrolet. Pigot, from Orlando, Fla., is the 2015 Indy Lights champion and the winningest driver in the Mazda Road to Indy driver development program. Barber Motorsports Park is the second of two venues on Pigot’s 2017 schedule that he had not yet raced in an Indy car. The first was the street circuit in Long Beach, Calif., where the 23-year-old gained 11 positions over the course of the race to finish 8th.

“Even though it is disappointing JR won’t be on track this weekend, I know he will still be great asset for myself and Zach. I’m looking forward to seeing what we can all accomplish together,” said Pigot. “Barber is definitely one of my favorite tracks, the fast corners and steep elevation changes are pretty unique and a lot of fun to drive. The track has been very good to me in the past, so I hope that trend continues this weekend!”

Though neither of the Mazda Road to Indy graduates have competed in a Verizon IndyCar Series race at Barber Motorsports Park, both are familiar with success at the track. Veach won the 2014 Indy Lights race at the 17-turn, 2.38-mile permanent road course, while Pigot swept both Pro Mazda races the same year. In 2015, Pigot repeated his performance by scoring back-to-back victories in the two Indy Lights races.

Also in 2015, 2011 Indy Lights champion Josef Newgarden won the Honda Indy Grand Prix of Alabama for Ed Carpenter Racing, his first career Indy car victory. Newgarden, from nearby Nashville, Tenn., followed up his win with a podium last year as he finished third in the No. 21. Even Sausalito, Calif.-native Hildebrand is a product of the Mazda Road to Indy, advancing to the Verizon IndyCar Series after winning the 2009 Indy Lights championship.

Team owner Ed Carpenter, who drives the No. 20 during the oval events, feels confident of his team’s ability to perform at Barber. “We will obviously miss JR being in the car this weekend, but we need to focus on what is best for his recovery and for ECR while he is recovering,” Carpenter commented.  “Zach is a driver that we have been interested in; during the test at Sonoma last year, he did nothing but impress. We know he will do a great job at Barber in what is a tough situation for everyone.”

Ed Carpenter Racing will look to earn their third podium finish in a row at Barber Motorsports Park this weekend. NBC Sports Network will air qualifying at 4:30 p.m. ET on Saturday, April 22. The live broadcast of the 90-lap race begins on NBCSN at 3 p.m. ET on Sunday, April 23rd.