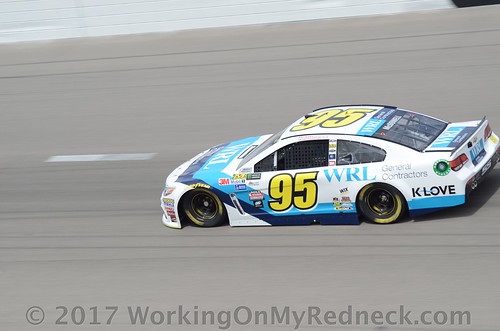 Michael McDowell and Leavine Family Racing (LFR) are eager to get back to short track racing at Bristol Motor Speedway for the Food City 500.

After the Monster Energy NASCAR Cup Series’ (MENCS) first off-weekend of the 2017 season, McDowell and LFR are excited to get back on track at the Last Great Colosseum, where McDowell is optimistic about the team’s chances at a solid finish. His best finish at the half-mile short track is 18th.

“Bristol is probably one of my favorite places to go,” said McDowell. “There’s a ton of excitement and the atmosphere and racing is awesome. They are putting a grip substance back down on the track, so there should be a lot of side-by-side racing. Last year, that really enhanced the race, so it should be another exciting race.”

LFR is also looking forward to supporting Carter Wilkerson, an overnight Twitter celebrity, in his quest for free Wendy’s chicken nuggets for a year. Carter has already achieved the impossible, reaching over 3.1 million retweets on Twitter out of the 18 million ask.

Iconic brands have already shown their support for Carter, and LFR wants the NASCAR community and the large social media presence to join in supporting Carter’s campaign.

“I am blown away by all of the support!” said Wilkerson. “It all started out just for fun. I just really wanted some chicken nuggets. Now, we’ve raised more than $100,000 for charity and it just keeps growing. I’ve just about beat Ellen, and I’m Twitter verified. I’m excited to see what’s next.”

LFR will feature a large decal on the TV panel of the No. 95 WRL Chevrolet SS with the Twitter hashtag #NuggsForCarter. The racing community can easily support Carter by going to LFR’s Twitter @LFR95 and retweeting the original tweet from Wilkerson’s account.