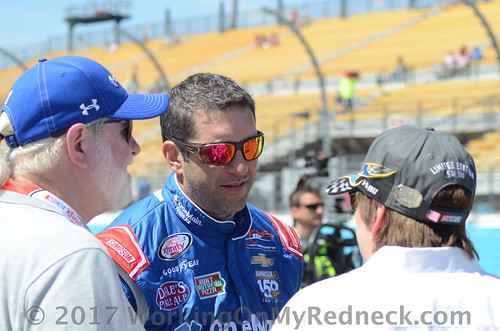 For more than a decade, Golden Corral has been a sponsor within the NASCAR industry, previously partnering with teams at the Cup Series level, and as the race entitlement sponsor for three years during Atlanta Motor Speedway’s spring event. The partnership with JR Motorsports marks Golden Corral’s initial foray into the Xfinity Series.

“Elliott is already a great ambassador for Golden Corral, and I know both he and the No. 1 team will represent them well,” said Kelley Earnhardt Miller, general manager of JR Motorsports.  “Over the years, Golden Corral has been an ardent supporter of racing on the team and track side, and we’re grateful to have them on board with JRM at Richmond.”

Sadler, a native of Emporia, Va., will debut the No. 1 Golden Corral Chevrolet Camaro at his home track of Richmond International Raceway in his 28thNXS start at the facility.  In that time, he’s claimed four top-five and 12 top-10 finishes.  Currently, Sadler leads the NXS point standings and has two stage wins to his credit in 2017 – both at Daytona International Speedway – to go along with two top-five and five top-10 finishes in the season’s opening six races.

“We are excited to be partnering with JRM and Elliott Sadler,” said Shelley Wolford, vice president of national marketing and media at Golden Corral.  “We look forward to cheering on Elliott as he races for kids across America at Richmond!”

ABOUT GOLDEN CORRAL:
Golden Corral, based in Raleigh, N.C., is the nation’s largest grill-buffet restaurant chain with 482 restaurants operating in 41 states as of January 1, 2017. Golden Corral is famous for its variety, including USDA steaks cooked to order, crispy fried chicken, seafood, awesome pot roast, hot yeast rolls, and desserts like homemade carrot cake and the Chocolate Wonderfall®.

ABOUT JR MOTORSPORTS:
JR Motorsports is the management company and racing operation for Dale Earnhardt Jr., NASCAR’s 14-time Most Popular Driver and winner of 50 NASCAR-sanctioned races.  Now in its 16th year of overall competition, JR Motorsports races in multiple divisions, including the NASCAR Xfinity Series where it won a championship in 2014.  The company also competes in Late Model competition and owns three championships in regional late model divisions.  To learn more about the organization, its drivers and its sponsorship opportunities, visit www.jrmracing.com.