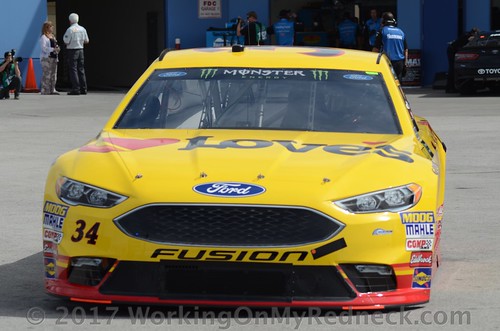 Landon Cassill’s yellow and blue CSX “Play It Safe” Ford will have a splash of green added for Earth Day this weekend at Bristol Motor Speedway. The No. 34 Fusion will promote CSX’s “Trees for Tracks” program, in which the transportation company aims to plant 42,000 trees by 2018.

The Jacksonville, Fla.-based railroad initially launched “Trees for Tracks” in 2009 with the goal of planting 21,000 trees – one for every mile of its track in the United States. After reaching that milestone, CSX extended the effort by doubling its goal.

In addition to including “Trees for Tracks” messages on the No. 34 Ford, CSX will also produce a limited-edition Cassill autograph card printed on seed paper to promote tree planting. Like its safety campaign, the environmental initiative is a component of CSX’s “Beyond Our Rails” program, where the company and its employees work to create a positive influence in the communities where they live and work.

Together, Cassill, Front Row Motorsports and CSX are aiming to get NASCAR fans thinking green.

“This is a special weekend for CSX and the 34 team,” Cassill said. “Normally the safety message is our main focus when they’re on our car, and, of course, that’s still important. But this weekend, with it being Earth Day, we want to draw attention to CSX’s commitment to being green and saving trees. CSX employees, their families and partners have planted about 30,000 trees so far, which is amazing.”

Visit treesfortracks.org to track the progress on the number of trees planted as the company works towards its goal. To learn more about CSX’s “Beyond Our Rails” program, visit beyondourrails.org.

Cassill will be on track at Bristol Motor Speedway in the green-themed CSX “Play It Safe” Ford beginning Friday for practice and qualifying, with the Food City 500 scheduled for Sunday at 2 p.m. ET live on FOX.

About Front Row Motorsports
Front Row Motorsports is a winning organization in the Monster Energy NASCAR Cup Series, the premier division of NASCAR competition. The team was founded in 2004 and is owned by Tennessean Bob Jenkins. FRM fields two full-time entries, the No. 34 of Landon Cassill and the No. 38 of David Ragan, from its Statesville, N.C., headquarters just outside of Charlotte. The team’s partnership base includes organizations such as Ford Motor Company, Love’s Travel Stops and CSX Transportation. Visit teamfrm.com and follow FRM on Twitter at @Team_FRM and on Facebook at facebook.com/FrontRowMotorsports.

About CSX
CSX, based in Jacksonville, Florida, is a premier transportation company. It provides rail, intermodal and rail-to-truck transload services and solutions to customers across a broad array of markets, including energy, industrial, construction, agricultural, and consumer products. For nearly 190 years, CSX has played a critical role in the nation’s economic expansion and industrial development. Its network connects every major metropolitan area in the eastern United States, where nearly two-thirds of the nation’s population resides. It also links more than 240 short-line railroads and more than 70 ocean, river and lake ports with major population centers and farming towns alike. More information about CSX Corporation and its subsidiaries is available at www.csx.com. Like us on Facebook (www.facebook.com/OfficialCSX) and follow us on Twitter (http://twitter.com/CSX).