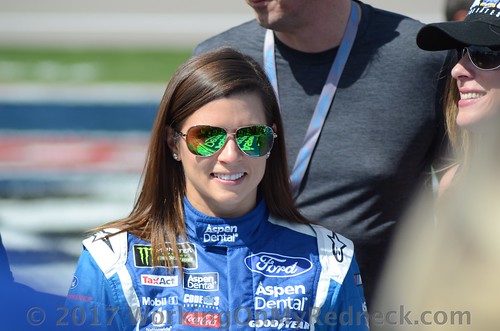 With Danica Patrick’s driving days possibly nearing an end in the not-too-distant future, what might have seemed like an off-track hobby is being fast-tracked into something far bigger. She launched the clothing line “Warrior by Danica Patrick” on HSN after participating in the design process. Additionally, she developed the workouts and meal plans for the book.

Ask Patrick about how much longer she will race, and her reply doesn’t suggest the question is off-target.

“As long as it’s fun — and it hasn’t been super fun lately,” she said before the season started. “But every year I start the year, I always have hope that it’s going to be the year that things are going to click. I understand my career hasn’t progressed.

“Maybe it’s regressed? Why is that? Am I worse driver than I was a couple of years ago? Probably not,” she said. “I don’t think anybody gets worse. So it’s really a matter of all the factors around you.”

Patrick turned 35 years old last month. She has been racing more than half her life, building her brand along the journey and using a marketing strategy that has made her one of the most recognized female athletes in the world despite her limited on-track success. She is ranked 29th through the first seven races of the season.

Patrick drives for one of NASCAR’s top teams, Stewart-Haas Racing, but the sponsorship that was so easy to come by during earlier days — remember the GoDaddy TV ads? — is now a harder sell. Before the season, Stewart-Haas Racing and primary sponsor Nature’s Bakery became embroiled in a lawsuit over missed payments by the sponsor and what Patrick did or didn’t deliver on behalf of the brand. It was an 11th-hour loss of about $15 million and it shed light on how hard it is to sell even the most marketable of drivers!

Now in her fifth full season in NASCAR’s top series, Patrick has yet to win a race and she only has six top-10 finishes in 161 starts.

Make no mistake: She can drive. She has led laps in both the Indianapolis 500 and the Daytona 500.

But make no mistake, her lone victory in the IndyCar Series came in 2008 and that sticks out as a glaring reminder of how her superstar status outstrips her racing resume!

It’s been a popular thought for some time that Patrick eventually would make the transition to a lifestyle career, maybe becoming some version of a Rachael Ray type. This much is true: Patrick appears capable of doing pretty much anything. She can whip up a five-course gourmet meal, pair wines, paint, and dress for either black tie events or black dirt at the race track.

Could it be that Patrick may be carving out a space in the lucrative health and fitness business where she ultimately wants to be?

“Sure,” she said after a long pause. “If I’m going to do all this and write a cookbook and a fitness program, I’ll take this as far as I can to motivate people to be successful. The program works. I know it works.”

After giving up dairy and gluten a few years ago, she really noticed the difference. She no longer would slog through a crummy afternoon and thought, “Man, today is just not my day.”

“I just don’t have those,” she said. “The only thing that knocks me out now, sometimes, is allergies. But I don’t get tired. I don’t get full when I eat — and I eat all the time, too.”

She is a firm believer in meal preparation, and almost always carries a cooler with healthy eating options. At Thanksgiving, she served a grain-free, dairy-free stuffing, and a cold salad of shaved brussels sprouts, toasted butternut squash and a homemade dressing.

She’s gone from working out once per day to twice per day and now occasionally three times. When it comes to food, there’s no such thing as a cheat day.

“Wine, and every now and again, I have too much. But that happens,” she said. “But I don’t ever, ever, not on purpose, cheat on food. It’s a routine. When I eat like (crap), I feel like (crap). If you want to lose weight and lean out, you have to eat well.”

There’s been a trickledown effect on her inner circle.

So it appears that Patrick’s future in the racing world is starting to wind down, witness the lawsuit with Nature’s Bakery, the scramble to try to sell the inventory of races left vacant by that sponsor’s withdrawal, the venture into a healthy lifestyle, a clothing line, etc.  The fact that Danica has not been, at all, successful in her NASCAR racing career makes a very difficult sell to corporate America on the idea of return on their investment.

Look for Danica to be headed out of the door at SHR inside of the next two years.  Her replacement, more than likely, sits in SHR’s Xfinity Series No. 00 driver’s seat in the name of Cole Custer.