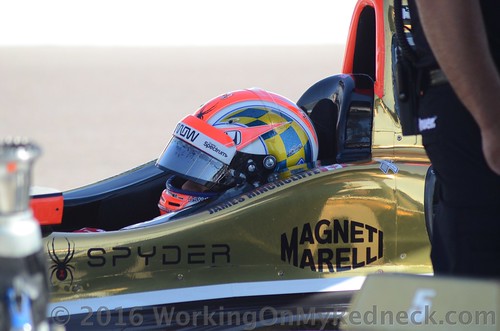 James Hinchcliffe started from the outside of Row 2 and assumed the lead on Lap 63 by going one lap longer on track before pitting than Andretti Autosport rivals Ryan Hunter-Reay and Alexander Rossi. From there, Hinchcliffe outlasted pressure from Hunter-Reay, Rossi and St. Pete winner Sebastien Bourdais to earn his first Indy car win in over two years.

“To do it here and finally at this place,” said Hinchcliffe, who claimed his first Indy Lights win and first Indy car top-five finish at Long Beach, “a track that I love so much, a track that’s been very good to me in my career, one that I think is the Indy 500 of street tracks … I think because of that history, it makes it a very special event, one that every driver wants to win. The greats have all raced here, the greats have all won here. To get in the winner’s circle was huge.”

Hinchcliffe fended off Bourdais by a final margin of 1.4940 seconds for his first win since NOLA Motorsports Park in April 2015. It is the first win for Schmidt Peterson Motorsports at Long Beach, a crown jewel of the Verizon IndyCar Series calendar.

“I feel like we’re back,” Hinchcliffe said after scoring his first win since his life-threatening accident at Indianapolis in 2015. “To finally do what was goal No. 1 when we set out at the start of the season, to get back into the winner’s circle, to do it as early in the season as we have, as convincingly as we did, it was a great race.”

With the result, the “Mayor of Hinchtown” climbed from ninth to second in the points fight following two of 17 races. Bourdais leads Hinchcliffe by 19 points, having collected first- and second-place honors in the first two races.

“We were not really, really quick,” admitted Bourdais, a three-time winner at Long Beach, “but we played off strategy and saved a bunch of fuel, still kind of maintained a half-decent pace. It was looking pretty good.

“We definitely feel like we’ve got things coming our way. We held our own in the restarts at the end there, scored another podium for Dale Coyne Racing and Honda. Really couldn’t be any happier for the guys. It’s a great start of the season.”

Bourdais looks to maintain his championship lead in two weeks’ time when the Verizon IndyCar Series returns to Barber Motorsports Park for the Honda Indy Grand Prix of Alabama.

TILNEXT TIME, I AM STILL WORKING ON MY REDNECK!