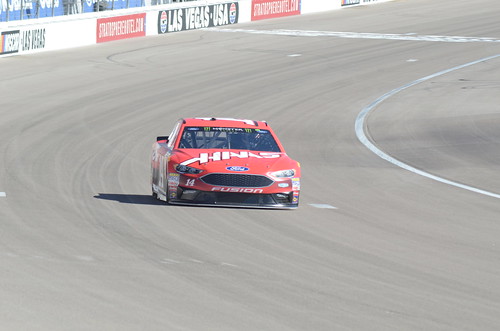 (photo courtesy Leon Hammack)
The No. 14 Haas Automation Ford driver for Stewart-Haas Racing (SHR) Clint Bowyer has enjoyed his fair share of success over 22 races in his career at Texas Motor Speedway in Fort Worth. The Emporia, Kansas native has led 85 laps on his way to three top-five finishes and 10 top-10s on the 1.5-mile oval.

Through that experience, it would be expected he knows well the secrets to success in Texas that he’ll apply once again to Sunday’s 500-mile Monster Energy NASCAR Cup race.

But that’s not the case. Just ask Bowyer.

“Whatever has been the key to success is Texas is probably the opposite of what you will want to do this weekend,” Bowyer said with a laugh. “It’s literally a whole new ballgame.”

That’s because a dramatically different racetrack will greet Bowyer and the NASCAR Cup Series drivers when they begin practice Friday.

The track and pit lane underwent a complete repave since the series last visited in November, and turns one and two were re-profiled, altering the configuration of the oval after its second full repave since it opened in 1997. The first time occurred in the summer of 2001 as the speedway had the racing surface repaved with a granite-based asphalt compound from the original limestone-based asphalt.

I’m not a fan of repaves,” Bowyer said. “It’s disappointing for everybody, including the tracks, but it was time. Tracks are like a bottle of wine in that they age really well. But, at some point, you pop the cork and drink the wine. After you drink it, the bottle is empty and it’s time for something new.”

One of the reasons for the Texas repaving project was the result of unusually lengthy rain delays that plagued all three NASCAR and IndyCar Series race weekends last year. The aging racing surface made it difficult to dry the track in a timely fashion.

“I remember being down there last year and thinking we might not get a chance to race on this track,” he said. “They kept pumping, but the water kept seeping up through the cracks and crevices in the racetrack. You can’t have that. You can’t have fans camped out in the infield waiting on something to happen while the sun is out and we can’t get on the track.”

The re-profiling of the speedway reduced the banking in turns one and two by four degrees, decreasing it to 20 degrees. That change added additional racing surface with the width expanding from 60 to 80 feet in that section of the track. The result is a more unique and challenging layout than the previous symmetrical layout of 24 degrees in each turn and racing surface width of 60 feet in those turns.

The changes will prompt a new strategy for Bowyer and his crew chief Mike Bugarewicz-led team that arrives at Texas eighth in the standings as it rides a streak of five consecutive top-13 finishes, including three top-10s.

“In years past, it’s been tire management and finding a groove where you can work, but I really do think that will be all thrown out the window,” Bowyer said. “Now, you will probably need to find the shortest way around the track, which means riding around the bottom will be the fastest way around.”

What are the new secrets to success on the newly repaved Texas Motor Speedway?

“For Texas it’s all about having the sheer speed. On those 1.5-mile tracks, you have to have a car that unloads fast. You can be a little bit tight or a little bit loose but, if that car isn’t making grip, making downforce and having the speed on the racetrack, then you are going to struggle. Unloading a fast hot rod right off the truck is going to be so important because you are going to have to qualify well and have that track position to be a contender.”