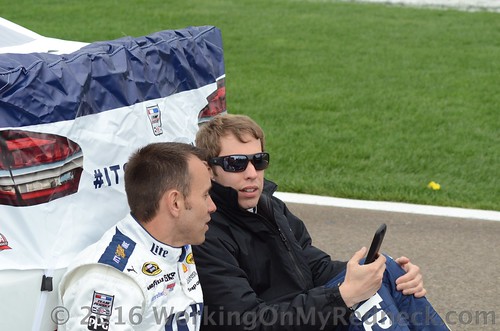 Recap: Brad Keselowski and the No. 2 Miller Lite Ford Fusion team made sure that Team Penske’s 1000th Monster Energy NASCAR Cup Series (MENCS) race was a memorable one by scoring the victory in Sunday’s STP 500 at Martinsville Speedway. After rain showers canceled the Friday afternoon qualifying session, Keselowski started the race from the fourth position as MENCS owner points set the field. He quickly moved into the top spot and held that position until the first caution flag of the day at lap 70. Unfortunately, NASCAR said the No. 2 Ford was too fast upon entering the pit stall and Keselowski was forced to restart the race from the rear of the field at lap 77.

Never one to panic, Keselowski and team worked their way back to the front of the field with strategy and a fast Ford Fusion. They finished the first, 130-laps stage in the fourth position to score seven bonus points. After pitting for four fresh Goodyear tires, fuel and an air pressure adjustment during the break, Keselowski restarted the second stage in the 20th position. It was during this stage that he began to show the rest of the field the strength of his Miller Lite machine.

All 130 laps of the stage were run without caution, and Keselowski drove his way into the third position by the end of the stage to score eight additional bonus points. The No. 2 Ford could pass either on the inside or outside lane, and was easily the fastest car on track as the second stage concluded.

The final, 240-lap stage featured numerous cautions that seemed to threaten Keselowski’s strength, which was on longer runs. However, he was able to maintain his position inside the top five for the remainder of the event. As the laps wound down, Keselowski and Kyle Busch displayed a quintessential Martinsville battle with Keselowski making the final pass for the lead at lap 458. He would hold on to pick up his 23rd career MENCS victory, and his first at the tough half-mile oval. The win made Keselowski the first multiple winner this season and extended his top five streak to a career-best five races.

Quote:  “You know, the two wins this year have both come at tracks that I haven’t won at before and we haven’t won at as a team before, so certainly that feels really good to be able to check something off the list. There seemed to be a lot of numerology today with this being the Penske team’s 1,000th start here in this series, and it’s been a long time since Ford won here. But it felt like we were due with the Miller Lite Ford, and if you ever can be, this is probably one of those tracks, and today was one of those days where we persevered in a special way with the battle there at Kyle at the end I thought was a lot of fun to be a part of.  Hopefully it was a lot of fun to watch and kind of harkens back to the legacy of this sport on short tracks and why this track has been around for 70‑some years because of battles like that.”

Recap: Joey Logano started fifth and finished fourth in the No. 22 Duralast GT Ford Fusion in Sunday afternoon’s STP 500 at Martinsville Speedway. The finish was the third top-five for the No. 22 team in the first six races of the 2017 Monster Energy NASCAR Cup Series season, but was undoubtedly the best example of championship determination to date.

After working the No. 22 Duralast GT Ford to the second position by lap 70, the team was assessed a pit road penalty for crewmembers jumping over the wall too soon. The penalty dropped Logano to the 30th position where he would have to rally back towards the front. Fortunately, Logano found the handling of the No. 22 Ford to be exceptional most of the afternoon, including good long run speed. Unfortunately, the laps remaining in the first stage were not enough for Logano to gain the championship points as the team concluded the first 130 laps in the 15th position.

Crew chief Todd Gordon utilized pit strategy to cycle Logano passed the majority of the front-runners at Lap 147 when he left the No. 22 on the track with only 20 laps on their tires. The second stage would feature all green flag racing where Logano maintained the track position gained on the previous yellow flag pit cycle.

However, misfortune would again strike the team. At lap 231, Logano was forced to pit with a flat left rear tire; the green flag pit stop would drop the team two laps behind the race leaders. The team later diagnosed the flat was the result of a puncture in the center of the tire’s tread. At the end of the second stage, the Duralast GT Fusion was two laps down and scored in the 27th position. The team, led by Gordon, remained poised and utilized the wave-around at the stage break to earn one of their laps back.

A quick debris caution brought the team back to pit road, putting Logano back out on fresh tires. When the caution flag was displayed again at lap 309, Logano earned the free pass and rejoined the lead lap. The team continued servicing the car throughout the race, making only small changes to keep up with changing track conditions, and repairing the minor damage resulting from Logano working his way through the field.

Through fierce determination, Logano cracked the top-10 at Lap 362 where he remained until the caution flag at lap 391. On the final pit stop of the afternoon, several competitors opted for two tires, and Logano rejoined the race in the 13th position. Over the remaining 100 laps, he maneuvered the Duralast GT Ford back to the top-five, and eventually into the fourth position where the team would finish the grueling 500-lap event.

Quote:  “Every time we got ourselves in position to get some stage points something happened and, I don’t know, we’d be about 30th. It wasn’t really because of the stages, it was more or less because of the tire. The tire just rubbered-up this racetrack so much, it was crazy to see how high we were getting. We were pushing the edges of concrete. You’ve never seen that here at Martinsville in a long, long time. The tires were chunking on the race track and rubbering up. It keep it interesting for everyone. It was an eventful Martinsville, like normal. Just a little wider race track and, I’m not going to complain about that.”