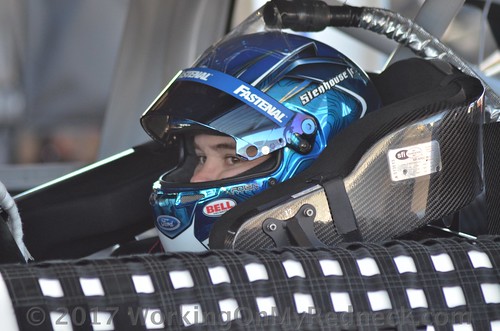 Coming to the green/checkers at the end of Stage 2, Kyle Busch passed Ricky Stenhouse Jr. to put the No. 17 Ford a lap down. But as Busch rolled through Turns 3 and 4, Stenhouse gave Busch two applications of “the chrome horn” to the bumper, knocked Busch’s No. 18 Toyota up the track in Turn 4 and executed a pass to stay on the lead lap.

Stenhouse’s tap also allowed Chase Elliott to dive to the inside of Busch’s car and get to the stripe first, depriving Busch of a stage win and a playoff point.

Busch has filed the incident in his memory banks, no doubt!

“They were doing everything they could in order to stay on the lead lap, but when you’ve got the leader to your outside and you just keep banging him off the corner, that’s pretty disrespectful,” Busch said.

“But do whatever you want. You know, it’s going to come back and bite you one of these days. You’ve just got to always remember race car drivers are like elephants – they remember everything. Every time they see a mouse, they remember.”

Is that Karma thing going to rear its ugly head back at Stenhouse at another short track race?  I think the answer to that question is an absolute definite, “your bet your sweet buttocks”!