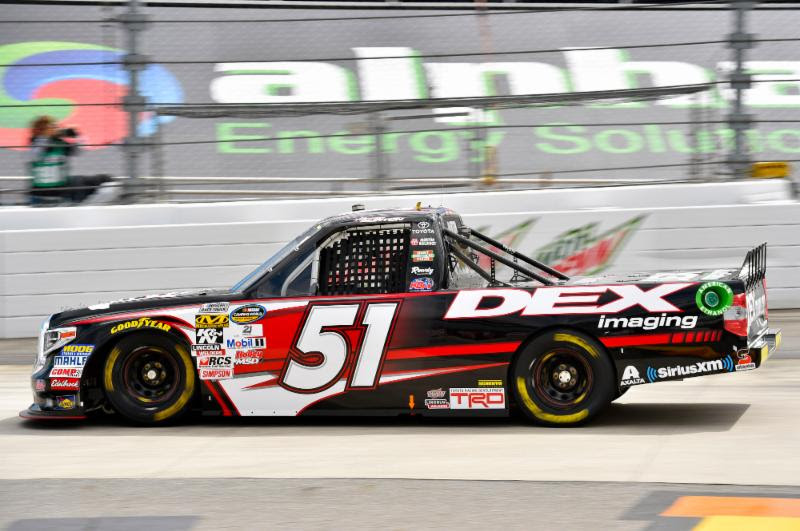 Harrison Burton, in only his second time behind the wheel of a Kyle Busch Motorsports (KBM) truck, finished a career-best 13th place in the Alpha Energy Solutions 250 at Martinsville (Va.) Speedway for the NASCAR Camping World Truck Series (NCWTS). This was his first race of the 2017 NCWTS season.

HARRISON BURTON, driver of the No. 51 DEX Imaging Tundra for Kyle Busch Motorsports:

This was your first race of the season, what are your thoughts?

“I had a lot of fun. It didn’t go quite our way, but we really fought hard and these guys never quit on me and I never quit on them. It is really cool to be a part of something like that. Even though we didn’t get the finish we wanted, 13this still something we can build on and something I can go home and be proud of. I am really happy that we ended the race and still has a drivable truck. I am really proud of our guys and we made good changes all day and I just can’t wait for my next race.”

Noah Gragson, driver of the No. 18 Toyota, finished 4th

Christopher Bell, driver of the No. 4 Toyota, finished 3rd

The No. 51 Toyota Racing team is now 10th in the Truck Series Owner Championship Standings.

Owner-driver Kyle Busch will pilot the No. 51 Toyota Tundra when the Truck Series resumes action May 12 at Kansas Speedway. Live coverage of the Toyota Tundra 250 begins with the NCWTS Setup Show at 8 p.m. ET.