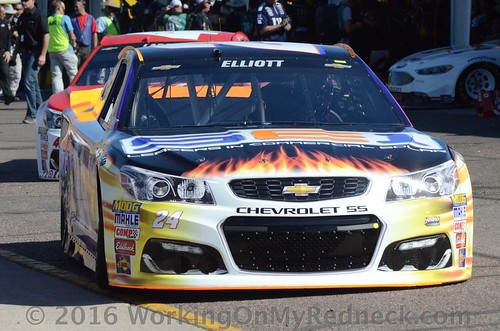 When it came to Chase Elliott’s performance in the Monster Energy NASCAR Cup Series at Martinsville Speedway, the driver of the No. 24 Hendrick Motorsports Chevrolet was suffering from a severe lack of self-esteem.

After Sunday’s STP 500 at the .526-mile short track, Elliott will have to reevaluate.

Starting on the outside of the front row after rain washed out Friday’s time trials, Elliott ran in the top five for the bulk of the afternoon and rolled home third.  This was by far his best result in four Monster Energy Series starts at the iconic track!

In fact, Elliott has shown steady improvement since running 38th in his 2015 debut at the track. In last year’s races, he was 20th, then 12th. And his third-place finish on Sunday followed a Saturday afternoon victory in a 250-lapper in the NASCAR Camping World Truck Series.

“We started the race, and for whatever reason, my car would not turn at all for the first three or four laps, and I about knocked whoever was on the outside of me back to Charlotte a couple times, and I thought we were going to drop like a rock,” Elliott said. “Fortunately, I don’t know if it was just being on the splitter or whatever it was, but actually our car kind of came to life and started turning pretty good.

“From there, it drove pretty similar throughout the entire day. Like I said, I hope it’s a consistent trend, that we can continue to run decent here. Obviously, we’d love to kind of take that next step and try to contend for a win. But from where I’ve been here in the past, night and day, so I was really happy and proud of that.”

Young Elliott has been on the verge of victory in several races this season.  It is has been just a few things that have not fallen in his favor or he would have two or three victories under his sophomore belt this season!  Look for Chase to punch his ticket to the playoffs very soon.