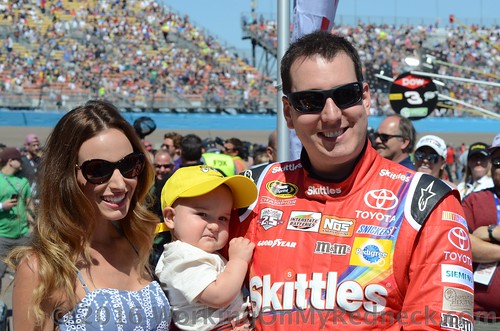 Joe Gibbs Racing, which dominated the first half of the 2016 Monster Energy NASCAR Cup Series season, is winless in five races to start the current season.

So is Hendrick Motorsports, the juggernaut that carried Jimmie Johnson to his record-tying seventh championship last year.

Instead, Kyle Larson delivered Chip Ganassi Racing its second victory in as many years last Sunday at Auto Club Speedway, and Ryan Newman broke a 127-race drought with his strategic win at Phoenix International Raceway.

But don’t think for a minute that “The Shrub” is worried heading into Sunday’s STP 500 at Martinsville Speedway.

“I don’t think it should be alarming,” Busch said on Friday at Martinsville, where he broke through with his first victory at the track in last year’s spring race. “I think it’s probably a good thing, to be honest with you. There needs to be more parity in our sport. There needs to be other teams that have the opportunity to get up there and run well and win races.

“You see RCR (Richard Childress Racing) has done that (with Newman). You see Ganassi has done that. Those would be two teams that probably haven’t won in the last couple years. I know Larson won a race last year, but not regularly, let’s say, like the JGR bunch or the HMS bunch. Our time is coming. We know that. We’ll turn our program around. We’ll get it up to speed to where we need to.”

Busch has acknowledged that JGR perhaps hasn’t kept up with other Monster Energy NASCAR Cup Series teams in adapting to the new lower-downforce aerodynamic package introduced full-time this season.

“I think we’re playing a little bit of catch up right now, to be honest with you,” Busch said. “We do have great partners with the guys at Furniture Row that have been running really good. They’ve been strong and up front each week.

“They have been helping us as well, getting our program to where we believe we know it can be. They’ve shown us. They’ve had the potential each week. We just have to get there with ourselves.”

There has been a different winner in each of the first five Cup races this year.  Will that trend continue at Martinsville, or will one of the first five winners log their second victory of the season?  Could Kyle Larson go back-to-back?  Those question will be answered Sunday as the Sun begins to set on “The Paperclip”!