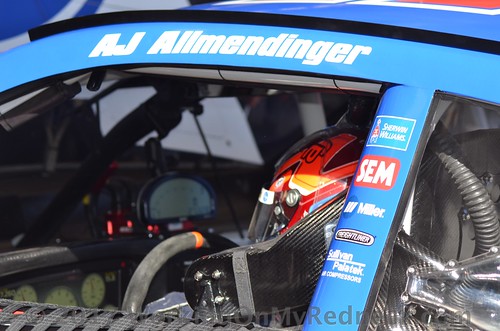 At first glance, there’s nothing even remotely close, alike or similar between Martinsville Speedway and Sonoma Raceway. Zilch, nada, nothing right?

At .526 miles, Martinsville is the shortest of short tracks in the Monster Energy NASCAR Cup Series, a narrow, flat, paper-clip-shaped venue with tight turns and concrete corners.  It is like two short drag strips attached with tight flat turns at the end of those straight-aways.

Sonoma, on the other hand, is a 1.99-mile road course with 10 turns (some of them right-handers) and dramatic elevation changes.

Surprisingly, though, A.J. Allmendinger has translated the techniques that have made him a road-course ace into an excellent record at Martinsville, where he has posted a pair of second-place finishes, most recently in last year’s spring race.

“I think it’s a race track that, when I first started, I had no clue how to get around, and just over the years trying to learn the techniques,” Allmendinger said in explaining his grasp of Martinsville, the host track for Sunday’s STP 500. “It’s somewhat like a road course in the sense of the way you brake and some of the stuff you can do with the throttle and things like that.

“A driver can make a bit of a difference here, so more than anything, just trying to learn the techniques. You still have to have a great race car. The last couple of years we’ve had a good set-up and been able to use it to have some pretty good runs.”

“It’s just a tough race,” Allmendinger said. “It’s one of those races that you can’t really let your guard down mentally for 500 laps. Anything can happen, usually get a late-race restart, so a race track that has been tough, but over the last couple of years has been really good for us, and hopefully can have another good run – because we definitely need it.”

Allmendinger currently is 30th in the series standings, with qualifying rained out on Friday, he’ll start 30th on owner points on Sunday and will have to slice and dice his way through the field to achieve a strong finish.