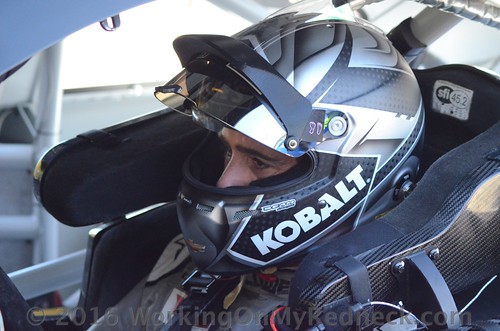 Do you ever wonder how long it would take to finally get to be successful at racing at Martinsville Speedway?  How steep would the learning curve be?  Here are a couple of drivers that gave their opinion.

When it comes to negotiating Martinsville Speedway successfully, Jimmie Johnson thinks of the learning process as a light bulb suddenly illuminating.

Denny Hamlin, on the other hand, thinks the use of data in analyzing the fastest way around the track has made it much easier to flip the switch than it used to be.

Make no mistake about it, Johnson and Hamlin are two of the best in the business at the .526-mile paper-clip-shaped short track – the site of Sunday’s STP 500 Monster Energy NASCAR Cup Series race.  Johnson has nine Martinsville victories, Hamlin five. From the fall race in 2006 (Johnson) through the fall race in 2010 (Hamlin), the two drivers combined to win nine straight races at the shortest track in the Monster Energy NASCAR Cup Series.

Though he has been to Victory Lane at Martinsville only once in the last three seasons, Johnson still believes it’s one of the toughest tracks to learn.

“For me, it took being lapped by Tony Stewart to figure it out, and then I followed him and got myself back on the lead lap and had a decent finish,” Johnson said. “I came here and tested with the No. 24 and had Jeff (Gordon) working diligently with me to figure it out, and it didn’t click, looking at the data. He would hop in my car and go faster, and it was just frustrating, and then it finally clicked.

“It’s one thing to create short-run speed, but there are some little things here in the rhythm that could just chew up tires and wear the tires out and make you drop back way too fast. It’s been great, because I feel like once you understand how to get around here, it’s something that you can keep for a long time, regardless of tire, generation of car, the test of time. It really stands up here on this small track more than anywhere.”

Hamlin would point out that, since his and Johnson’s run of nine straight ended in 2010, there have been eight different winners in 12 Monster Energy NASCAR Cup Series races at Martinsville. To Hamlin, information sharing has made all the difference in the world.

“Data sharing,” Hamlin said emphatically. “Data sharing has changed the game in which drivers learn how to be fast and how to be good at certain race tracks. If the field gets closer to you, you have less room for error to get a race win…

“When the field gets close like that, that just makes you have to be on your game every single time, where, before, I feel like I could have kind of overcome anything that kind of threw our way at any point in the race. You can’t do that now.”

Well this weekend we shall see if either of these two drivers will be hoisting the hardware in Victory Lane!