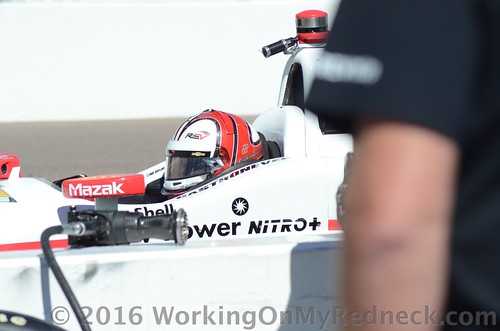 The significance of Team Penske testing twice in eight days at Indianapolis Motor Speedway isn’t just the track time.  No there is much more to it than just getting the drivers on the  race track!  When the four cars return for Saturday’s session at a Chevrolet test, engineers will have had sufficient time to analyze and decipher the data from the March 24 test and apply that information to the second test.

“The best benefit is we’ve got eight days in between each test,” said Kyle Moyer, Team Penske competition director. “So what we do (at the first test), we can decipher and then come back (on Saturday).

“It’s not like the month of May, where every single day you’re out there running, you’ve got less than 12 hours before you’re back at it so you don’t really have time to look at everything. Here, everybody has their run planned. We came in here (for the March 24 test) with more of a set plan for each car. They’ll run through that set plan, then we’ll go home and decipher all through that, what we’ve tested and what we believe is great, we’ll come back, some of it we’ll re-check, some of it we’ll just add onto.”

Aside from some wind, Helio Castroneves, Will Power, Simon Pagenaud and Josef Newgarden had favorable conditions with unseasonably warm temperatures in the March 24 test, when Team Penske used a team test day to join seven Honda cars for that manufacturer’s test day on the 2.5-mile oval. Saturday’s forecast calls for cooler conditions with highs in the 50s.

When driving for Roger Penske, it’s understood that the Indianapolis 500 is the primary race objective. The legendary Hall of Fame owner has won the race a record 16 times, most recently with Juan Pablo Montoya in 2015.

Penske will bring Montoya back for a fifth entry in May’s 101st Running of the Indianapolis 500 presented by PennGrade Motor Oil on the oval and the INDYCAR Grand Prix on the IMS road course. Castroneves has won the Indy 500 three times, most recently in 2009. Montoya has won it twice (once for Team Penske, once for Chip Ganassi Racing).

Team Penske dominated the 2016 Verizon IndyCar Series with 10 victories in 16 races. Pagenaud prevailed five times to claim the series title. Power won four races to finish second. Montoya had the other win in the season opener. Despite going winless, Castroneves finished third in the championship.

But the much-anticipated 100th Indianapolis 500 was a reminder that even the best series team isn’t guaranteed success. Power finished the race in 10th, Castroneves 11th, Pagenaud 19th and Montoya 33rd.

Two tests in eight days is a reminder of how Team Penske is always pushing forward.

Team Penske driving coach Rick Mears, who owns four of the team’s Indianapolis 500 wins, reiterates that every practice lap is important. The more, the better.

“This business is about progress and going forward,” Mears said. “The day you stop doing that is the day you need to get out.

“Anytime you can get in a car and get on the track, from a driver standpoint, that’s my office. I want to make my office as nice as possible. You keep working on the thing because the better it works, the less I have to. That’s the key. Anytime you can get on track, you can test and experiment and try things you might not have to at a race event. You can think outside the box a little bit more.”

Castroneves, who will be entering his 17th Indy 500 in his 20th Indy car season, agreed with his mentor and race spotter.

“You can never stop learning here, every time you come out. It doesn’t matter the temperature, what the weather does to the track, the wind, it’s always about learning something,” Castroneves said. “That’s why I love to be here.”

Power, the 2014 Verizon IndyCar Series champion who has five top-10 Indy 500 finishes in nine tries, including second in 2015, thought the windy conditions from last week’s test were a benefit.

“It’s just nice to be around this place. I feel good about it,” Power said. “It’s kind of hard to learn stuff unless we’re in traffic, but with the wind, that’s made it better because it’s really difficult to hang onto.”

Newgarden, who has three wins the past two years, enjoyed his best Indy 500 last May, when he started second and finished third for Ed Carpenter Racing. Nobody is more excited to be back on this track than him.

“That kind of makes this relaxing, right?” Newgarden said of the two tests. “You can kind of work on what you need to. You don’t have to rush. It just gives us a good preview of what we’re going to be doing when we come back in the month of May.”

With five cars entered into the 2017 Indy 500, Team Penske is surely hoping that it can put one of their cars into Victory Lane and hoist the Borg-Warner Trophy and drink the milk at the end of the day!