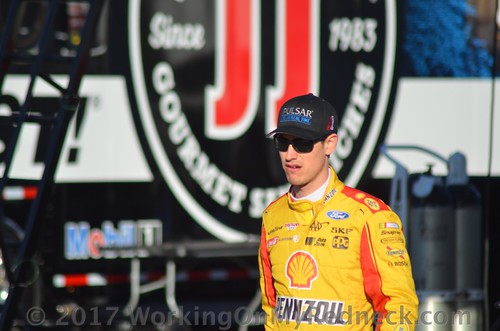 Though most drivers aren’t consumed with detailed historical statistics, there’s one particular number Joey Logano can’t forget – because all the folks at Ford Performance won’t let him!  It is a very painful stat the cuts deeply at Ford.

No Ford driver has won at Martinsville Speedway since Kurt Busch took the checkered flag in 2002 in a car fielded by Roush Fenway Racing.

“We are aware of that stat,” said Logano, who was leading the playoff race in 2015 before Matt Kenseth took revenge on the Team Penske driver in Turn 1 and drilled Logano  into the fence! “That’s how important it is. We’re aware of that.

“This is definitely one of those race tracks where Ford hasn’t won in a long time, and hopefully it’s right around the corner.”

Though Logano hasn’t tasted victory at the short track yet, he won three consecutive poles at Martinsville from 2015-2016 and started on the outside of the front row in last year’s playoff race.

“Sometimes I feel like we’re really close, and the next race it’s completely different,” Logano said. “It’s a matter of keeping up with the changes. We have a new (right-side) tire this weekend. How that is going to react?

“We’re going to have to pay attention to that. I think track temperature has a big effect on how the race is played out and what you need in your race car to be fast. We’ll keep an eye on all that stuff.”

Can this be the weekend that a Ford drives back into Victory Lane, hugs the grandfather clock, and erases the winless streak at the “paperclip”?