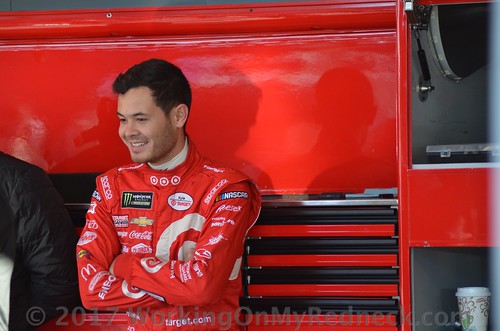 After running out of gas with the lead on the final lap of the Daytona 500 and finishing runner-up in the three subsequent races, Kyle Larson finally got his first win of the season last weekend.  The No. 42 Chevrolet driver led a race-high 110 laps on his way to Victory Lane in last Sunday’s Auto Club 400 at Auto Club Speedway in Fontana, California.

This weekend, the Monster Energy NASCAR Cup Series heads back east to Martinsville Speedway where Larson will go for his second consecutive win and fifth straight top-two finish in Sunday’s STP 500.

“Our cars are by far as good as they’ve ever been, really good at every race track right now,” Larson said. “In both series I feel like I have a shot to win every time I go to the race track.”

Larson’s early-season performance, highlighted by his 3.8 average finish, has vaulted him to first in the Monster Energy NASCAR Cup Series points standings. He currently sits 29 points above second-place Chase Elliott. A Japanese-American, Larson is the first alumnus of NASCAR’s Drive for Diversity development program to lead the Monster Energy Series in points.

In six career starts at Martinsville, the 24-year-old has finished better than 14th only once – third in last year’s spring race.

“In the past, I had race tracks where I knew I would be good at,” Larson said. “But right now we’re going to some tracks that aren’t great for me, and running up front. It’s a lot of fun to have that confidence in the race team, go to the race track, fight hard and run for wins.”

Keep you eyes on “Young Money”, this could be his break out year!

Is this the year that the torch gets passed to some of NASCAR’s young guns?  The answer could begin to unfold before our eyes in the next few weeks!