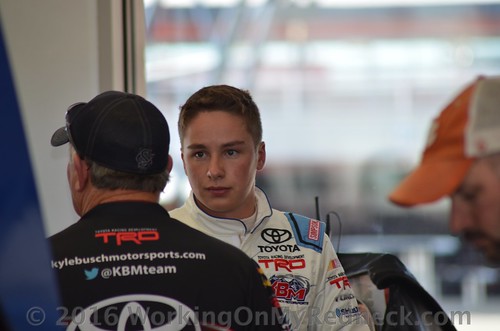 There’s been no sophomore slump for Christopher Bell in his second full-time season in the NASCAR Camping World Truck Series.

The 22-year-old Oklahoman tops the standings by seven points over defending series champion Johnny Sauter after an eighth-place finish at Daytona and win at Atlanta to open the season. Bell, who became the first driver to sweep the stages and win a race under NASCAR’s enhanced format at Atlanta, leads the Camping World Truck Series with seven playoff points.

On Saturday, Bell will attempt to extend his points lead in the Alpha Energy Solutions 250 at Martinsville Speedway, the first NASCAR Camping World Truck Series race in a month.

“The more seat time you have the better off you are, so I’m looking forward to going back to Martinsville for a third time,” Bell said. “It’s a tough track because it’s very unique – there’s nothing else out there like it. It’s a short track, it’s really small, there are a lot of vehicles out there on the track and because of all of that it’s pretty easy to get roughed up. You have to make sure you run a smart race yourself, but you also have to be extra careful of what the other drivers are doing around you because the quarters are so tight.”

It will be interesting to see if Bell, after more than a month away from pavement racing can resume his winning ways.  It is still early in the CSTS season, however, you could be watching Bell materialize into the 2017 CWTS champion!