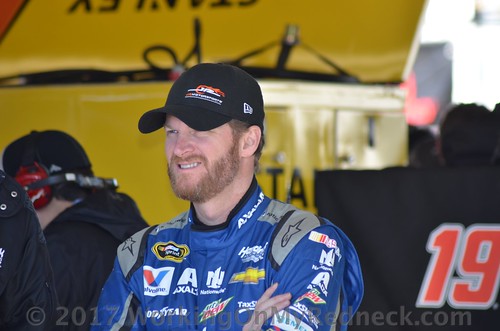 (photo courtesy Leon Hammack)
The successful Driven to Give Gloves campaign will kick off at Martinsville Speedway this weekend to benefit Nationwide Children’s Hospital and four Patient Champions, The Dale Jr. Foundation announced today. This year, Dale Earnhardt Jr.’s race-worn driving gloves will be auctioned off four times during the NASCAR season to raise funds for the groundbreaking work done by the researchers and physicians at the Columbus, Ohio-based hospital.

“The Driven to Give Gloves Program is a great way to showcase our partnership with Nationwide and to support Nationwide Children’s Hospital,” said Earnhardt Jr. “This program is really a unique opportunity for us to work with Nationwide while also fulfilling the mission of The Dale Jr. Foundation, which is to help children in need. I am proud to be a part of this and proud to raise money and awareness for Nationwide Children’s Hospital and all the incredible things they are doing for kids.”

Earnhardt Jr.’s signature skeleton-themed Alpinestars gloves will feature a different color during four months of the NASCAR Cup Series season.  The respective colors will spotlight four Nationwide Children’s Hospital Patient Champions to raise awareness and funds for the Hospital’s clinical and research programs.  Nationwide Children’s Hospital is America’s largest pediatric hospital and The Research Institute is one of the Top 10 National Institute of Health-funded freestanding pediatric research facilities in the United States. All care is provided regardless of a family’s ability to pay.

“Nationwide Children’s sees patients from every state in the country and almost 50 nations around the world,” said Jim Digan, president, Nationwide Children’s Hospital Foundation.  “Our research improves lives everywhere. Having Dale Earnhardt Jr. be so involved with our institution raises much needed funds and, more importantly, awareness. He’s been a truly remarkable partner and we are so grateful to have him and everyone at The Dale Jr. Foundation be so generous.”

Driven to Give Gloves begins in April (in races at Martinsville, Texas, Bristol and Richmond) with Earnhardt Jr. wearing gloves accented in blue to raise awareness and funds for Autism.  The Patient Champion will be Tristen Cooper.

“Dale Jr. has developed a very special relationship with the patients and staff at Nationwide Children’s Hospital during the past few years,” said Mike Boyd, senior vice president of Marketing for Nationwide.  “In that time, he’s taken an active role in supporting the efforts of the hospital. This glove program is just one of the many ways Dale Jr. helps Nationwide shine a national spotlight on the life-saving work taking place at Nationwide Children’s Hospital.”

At the end of each month, Earnhardt Jr. will sign the gloves for auction at TDJF’s eBay store with all of the proceeds going to benefit care and research. Since its inception in 2014, the Driven to Give Gloves program has raised more than $100,000.

“Helping children is the core mission of The Dale Jr. Foundation, and Nationwide, through its Nationwide Children’s Hospital, does that every day,” said Kelley Earnhardt Miller, general manager of JR Motorsports and vice-president of TDJF. “With our Driven to Give Gloves campaign, we’re helping to support the doctors, nurses, Patient Champions and their families and everyone else involved.”

TDJF’s mission is to give underprivileged individuals, with a focus on youth, the resources to improve their confidence and education, and the opportunity to achieve extraordinary goals.  Since 2007, TDJF has contributed to charities on local, regional and national levels through donations and nonmonetary aids.

The complete list of glove colors to be worn by Earnhardt Jr. and the Patient Champions the TDJF will aid in 2017 is as follows:

· April – Blue Gloves (Autism) 10-year-old Tristen Cooper: Tristen was diagnosed with Autism as a toddler and first went to Nationwide Children’s Hospital for eye surgeries. Soon thereafter, Tristen was being followed by the Hospital’s Center for Autism Spectrum Disorders. Recently Tristen has also become a patient of Nationwide Children’s Center for Colorectal and Pelvic Reconstruction, Gastroenterology, and Interventional Radiology. He loves monster trucks and NASCAR and is quite the baseball player, winning a silver medal in the baseball throw at the 2016 Special Olympics Summer Games in Columbus.

· June – Red Gloves (Safety Awareness Month) 5-year-old Ailee Gilliland: After sustaining facial burns at the age of 2, Ailee was taken to the Burn Unit at Nationwide Children’s Hospital for treatment. She spent a week in the unit and returned for another soon after. In the three years since, Ailee has spent thousands of hours going to outpatient appointments and occupational therapy. She has undergone three plastic surgeries. Today, Ailee is a typical 5-year-old who loves princesses, gymnastics and school. She is a happy, fun-loving girl who can make anyone smile with her silly outgoing personality.

· July – Pink Gloves (Therapeutic Recreation Awareness) 10-year-old Maddie Delaney: When Maddie was just 2, she underwent a six-hour spinal surgery to release the built-up tension in her legs caused by cerebral palsy. She spent almost an entire month on the inpatient rehabilitation floor at Nationwide Children’s Hospital. But, through it all, Maddie never gave up and maintained a positive, upbeat attitude. Her enthusiasm for life is contagious and she inevitably brightens the day of everyone she meets. Maddie is currently pursuing her black belt in Tae Kwon Do, will be starting up horseback riding lessons, and enjoys swimming, singing and acting.

· November – Gray Gloves (Diabetes) 10-year-old John Roger Curry: At the age of 2, John Roger, who goes by J.R., was diagnosed with Type 1 Diabetes. He started out with four shots and at least 10 finger pokes a day – that’s 1,460 shots and 3,650 finger pokes in a year. In the beginning, he had a really rough time adjusting to his condition. But, eventually, he got used to the process and became accustomed to the needles. Recently, J.R. switched to a pump, which gives him a lot more freedom and his parents are able to monitor the readings. J.R. doesn’t let his diabetes stop him from doing what he loves. He plays soccer, baseball, basketball and is even a race car driver.

ABOUT THE DALE JR FOUNDATION:
The Dale Jr. Foundation is a charity dedicated to giving underprivileged individuals with a focus on youth, the resources to improve their confidence and education, and the opportunity to achieve extraordinary goals.  For more information, visit www.thedalejrfoundation.org.

ABOUT NATIONWIDE:
Nationwide, a Fortune 100 company based in Columbus, Ohio, is one of the largest and strongest diversified insurance and financial services organizations in the U.S. and is rated A+ by both A.M. Best and Standard & Poor’s. The company provides a full range of insurance and financial services, including auto, commercial, homeowners, farm and life insurance; public and private sector retirement plans, annuities and mutual funds; banking and mortgages; excess & surplus, specialty and surety; pet, motorcycle and boat insurance. For more information, visit www.nationwide.com.

Nationwide, Nationwide is on your side, the Nationwide N and Eagle are service marks of Nationwide Mutual Insurance Company.