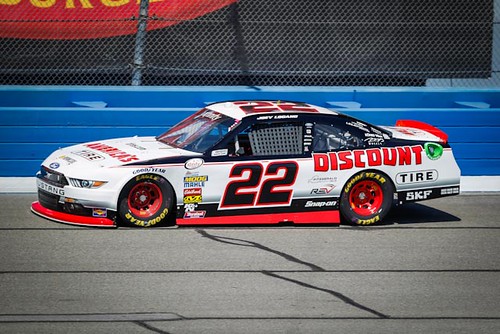 Recap: Joey Logano started from the pole and finished second on Saturday afternoon in the No. 22 America’s Tire Ford Mustang at Auto Club Speedway. Logano, who led a race high 70 laps, had anything but a relaxing Saturday afternoon drive at the two-mile Auto Club Speedway. On the first pitstop of the race at lap 29 the team executed a perfect pit stop, sending the No. 22 back out in the lead. However, Logano was penalized for speeding after running two fast down pit lane in sections two through nine. The team quickly diagnosed that the lights on the tachometer were inaccurate, but were able to recalculate and provide Logano with an accurate light count and RPM to use for the remainder of the event. The recalculation proved correct as Logano managed to avoid speeding for the rest of the afternoon.

Throughout the event, Logano found the handling of the No. 22 Mustang to his liking as he was able to rebound from the speeding penalty and drive his way back to the second position before the next round of stops. Crew chief Greg Erwin and the No. 22 team made minimal adjustments to the car throughout the race, using only minor air pressure changes and adding tape to the nose to increase down force.

When the team pitted with less than 50 laps remaining, trouble again found the team on pit lane, this time with the No. 22 Mustang falling off the jack, again relegating Logano to the back of the pack. Unfazed by the circumstances and having already rallied from the back previously in the event, Logano radioed the crew and assured them by saying: “we’ll get it back guys.” Again, the 26-year-old veteran driver wasted no time demonstrating the superiority of the No. 22 Ford, working his way back to the lead in 14 laps.

With just 11 laps remaining, eventual race winner Kyle Larson passed Logano’s Ford, but as fate would have it, another caution flag was displayed with 10 laps remaining. The call from Erwin was four tires and tape for the America’s Tire Mustang, pitting from the second position. The team came off pit road in the third position after another competitor opted for two tires, a move that would disadvantage Logano on the ensuing restart. Logano was able to get the No. 22 back to the second position and closed within .127 seconds on the final lap, bringing home the second consecutive second place finish for the team, and the third on the season.

The finishing position, along with the nine points from the second stage kept the No. 22 Ford Mustang in the lead of the NASCAR XFINITY Series Owner’s Points, leading second place by a margin of 33 points. While the team fell just one position shy of their desired finish, Logano’s determination was on full display having passed the entire field not once, but twice in the 150-lap event.

Quote:  “I vote for two races at Auto Club Speedway.  I’ll be the first to say that.  What an awesome race track.  It’s so much fun.  You can run anywhere you want.  The racing is great.  There is tire falloff.  There are bumps.  There’s everything here.  It’s the perfect race track.  I wish we came here more often because it’s the best race track we go to, so I’m excited about racing tomorrow.  I’m mad about not winning today is the best way to put it.  We had such a fast Discount Tire Ford today.  We qualified really good and obviously led a lot of laps.  We had the fastest car and didn’t win the race.  There’s a lot to look back at and understand exactly why.  Obviously, execution plays a big role in these races.  You can have the fastest car and if you don’t execute, you don’t win.