• This season, the OneMain Financial team has earned two top-eight efforts and an average finish of 6.5 during NASCAR’s West Coast swing. 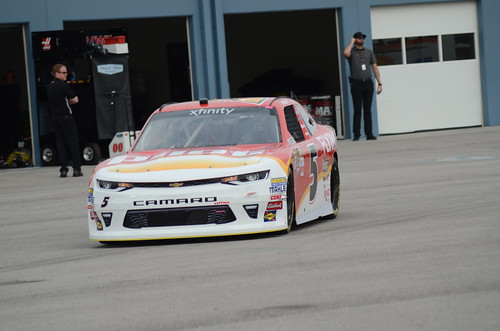 • Michael Annett is currently ninth in the Xfinity point standings after coming off his first top-10 finish of the 2017 season last weekend in Phoenix.

• In six starts at ACS, Annett has completed all but two laps attempted and has a best finish of sixth in the fall of 2009. • Annett has an average finish of 14.8 thus far in 2017 which ranks him fifth among full-time Xfinity competitors.

• The 30-year-old Iowa native has competed in the Xfinity Series for seven years and has seven top-five and 35 top-10 finishes.

• Coming off a win at Phoenix, Justin Allgaier enters the weekend fourth in the NXS point standings, just 29 points outside the lead.

• Over the past two races, Allgaier has gained 22 spots in the NXS point standings.

• In eight starts at ACS, the Illinois native has three top- 10 finishes, with a best finish of eighth (2010).

• Last season, Allgaier finished 10th at ACS after being force to a backup car due to damage caused in practice.

• Allgaier has led more laps this season (85) than any other NXS regular.

• William Byron will make his first start at Auto Club Speedway on Saturday. Byron has one NXS start on a track greater than one mile, capturing his first top-10 finish at Daytona earlier this season. • The Rookie of the Year contender is currently leading the rookie standings and is second in the NXS championship standings, 11 markers behind leader, and teammate, Elliott Sadler. • Crew chief Dave Elenz has called the shots in two previous races at ACS. Elenz visited Victory Lane with the No. 88 team in 2015, after Kevin Harvick led 67 percent of the total laps.