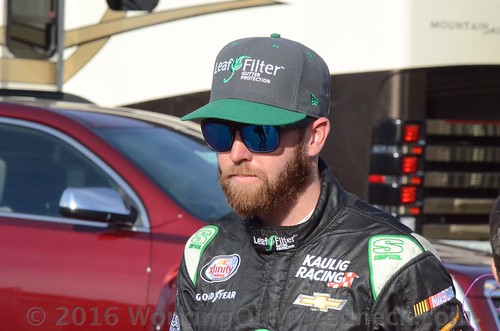 Recently I had the opportunity to sit down with Kaulig Racing’s Blake Koch to get some insight into Blake Koch, the man.  I am hoping that you will get a picture of not only Blake Koch the race car driver, but more importantly Blake Koch the man. Herein lies the conversation that took place between practice rounds.

Working On My Redneck:  Blake can you tell us about your introduction to racing, kind of the who, what and when of that situation?

Blake Koch:  I am sure that my story was a different approach than most people that you talk to.  I was 20 or 21 years old the first time that I got into a race car!  My step-dad is a big NASCAR race fan and bought a crate motor pro truck back in Florida. Around that time, the end of 2007, he asked me if I wanted to drive it.  I said sure!  I tried it out and absolutely fell in love with it. I then started following NASCAR and I decided that I wanted to pursue the dream to drive in NASCAR.  It has been a lot of hard work and, of course, it must be in God’s plan, because this race at Phoenix is my 200th career NASCAR race!  That includes my starts in the Camping World Trucks, Xfintiy and Monster Energy NASCAR Cup races.

WORM:  How did you get hooked up with Matt Kaulig and Kaulig Racing?

BK:  Matt Kaulig started sponsoring me at TriStar Motorsports in October 2014.  His company, Leaf Filter Gutter Protection, was new to NASCAR and came onto the scene.  Matt saw what the NASCAR sponsorship did for the race team and what it did for the growth of his company and renewed his sponsorship in 2015 with TriStar Motorsports.  In 2016 Matt wanted to start his own race team and needed a driver, so he contacted me to be his driver and I obviously said yes.  We had a great 2016 and we are off to a decent start this year, too.

WOMR:  Speaking of last year, did it seem to be magical or special?  The team was put together with  relatively short notice and Kaulig Racing made the Chase and a big splash in the Xfinity Series.

BK:  Yes it did feel very special!  Not only because we were a new team, but even if we had been around for 5 years it would have been special,  because we had such a great year.  We had such a great year when it counted in the playoffs and almost made it to the final four at Homestead.  We just missed that by a few spots.  It felt really good to be competing at that level.

BK:  Our expectations are to just continue to improve.  To improve as a race car driver.  To improve as a race team.  To have our stuff look good at the race track.  To just keep getting better each week is all you can really ask for.  If you put in the hard work, the results will come.  So that is what we are trying to do each week.

WOMR:  Having just said that, Blake, what would it take for you to say that this was a successful year at Homestead this November?

BK:  To win the championship, just to be honest with you!  Even though we finished 7th in the championship last year, man I wasn’t happy with that!  I am kinda talking about my Christianity here, but if you put all of your efforts in results you will never be satisfied.  So I try to find my joy in The Lord, my family and my wife.  As a race car driver, if you are not winning championships then you will not be happy.

WOMR:  Blake, if you weren’t a race car driver what would you be doing for a living?

BK:  Now that I know the story and the depth of the company, Leaf Filter Gutter Protection, and how happy everyone that works there is, I would absolutely go to work for that company.  I would sell that product, because nobody wants to climb up on the roof and clean out their gutters. When People hear about this product people just say oh yeah!  With Matt Kaulig’s leadership the foundation of that company is like no other that I have seen.

WOMR:  Blake, in all that you have done both personally and professionally, what are you most proud of?

BK:  (There was a long thoughtful pause before Blake responded)  My answer has to do with home.  When I go home from the race track I am so proud to be the father of my two kids.  I am proud to be a good husband that can provide for my family.  I know that this is all provided by God, but I am very proud of the situation that I am in.  I am also very proud that I get to drive these race cars.  I am a young driver with a young family, I am proud of some of the decisions that I have made and people that I have surrounded myself with.

Both Blake and his race team are not one of the marquee race teams, they do not have the spotlight shinning brightly on them with all the hype like JR Motorsports, like Roush-Feneay Racing or like Joe Gibbs Racing.  But last year Koch and Kaulig Racing did show that, despite being put together very late in the offseason, they can “run with big dogs”!  It would appear that Koch and Kaulig Racing have an excellent chance to be included, once again, in the 2017 playoffs.

Sitting down with Blake was a very interesting and a very enlightening experience.  He is not one of the drivers in the Xfinity Series that is the recipient of a lot of media attention.  Nevertheless, I hope that you have gotten a glimpse into the personality of Blake Koch and a better idea of what drives him to be a better race car driver.  Also, I hope that you came away with the knowledge, like I did, that Blake Koch is a very nice person, that he has high morals and that he is also a very driven race car driver.

Best of luck to Blake and Kaulig Racing in 2017.