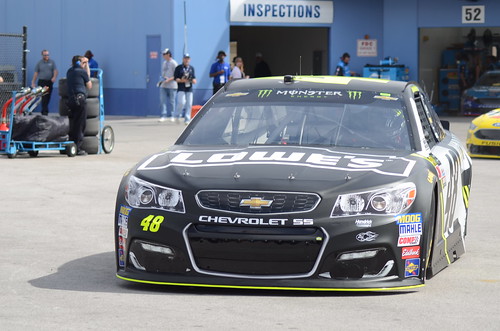 What Jimmie Johnson perceives as a deficiency in his qualifying efforts was compounded on Friday when the driver of the No. 48 Hendrick Motorsports Chevrolet spun in Turn 4 during a mock qualifying run at Auto Club (Fontana, California) Speedway.

Johnson’s car turned in front of the No. 41 Ford of Kurt Busch, which was rolling slowly on the apron. There was no contact between the cars, but Johnson’s Chevy plowed into the infield grass, creating enough damage for crew chief Chad Knaus to opt for a backup car, heading into Sunday’sAuto Club 400 (3:30 p.m. ET on FOX).

“We just showed up at the track swinging hard, trying to get all that we could,” said Johnson, who has won three poles in his last 113 races, as his average starting position declined from 9.8 in 2013 to 12.1 in each of the last two years. “We crossed the line there, for sure, and the car came around on me. But we have a great Lowe’s Chevrolet (backup car) coming out.

“I thought we might be able to stick with this one, but that was too much (damage) on the front of the race car. It’s not the way we wanted to start the weekend. But the only way we’re going to get better without testing is just to keep trying harder in practice and swing harder. We know we got the race side in a respectable spot but just need to start better on Fridays.”

Because the team went to a backup before Friday afternoon’s qualifying session, Johnson won’t have to start from the rear in Sunday’s Monster Energy NASCAR Cup Series race.

But Johnson acknowledged he likely gave Busch an anxious moment as he slid past the Stewart-Haas Racing Ford.

“I knew I was fine, but I’m sure it caught him off-guard seeing a car come by sideways,” said Johnson, Fontana’s most prolific winner with six victories at the track. “I was really concerned about sliding up in front of others and getting into the outside wall.

“I actually threw it into third (gear) and redirected the car lower on the track. I was kind of wishing I’d stayed with it and let it slide up and maybe I would have avoided the grass if I did so. I was just trying to manage it all.”

After the incident, Johnson was faced with the prospect of qualifying the backup with no laps on the car, since there wasn’t sufficient time at the end of practice to prepare the car and get it on the track.

After closer examination of the damages on the No.48 HMS Chevy, crew chief Chad Knaus elected to fix Jimmie Johnson’s primary car and drag out the backup car for the race at ACS.