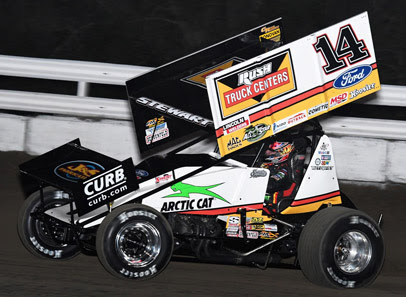 There’s something special about racing in Indiana during the month of May and, for motorsports icon and Indiana native Tony Stewart, having at least one night of racing back home on his 2017 schedule was a must. Tony Stewart/Curb-Agajanian Racing (TSR) announced today that Stewart will be part of the field for the May 19 Arctic Cat All-Stars (ASCoC) presented Ford Performance event at Kokomo (Indiana) Speedway.

The Friday-night event is the only Winged Sprint car race at the quarter-mile, high-banked dirt oval this year and the only 410-cubic inch Sprint car race that Stewart is scheduled to contest in his home state of Indiana in 2017. The Columbus native will be making his first start with All-Stars at the facility after previously racing there with the World of Outlaws and competing numerous times early in his career in both Midgets and non-Wing Sprint cars.

“I’m really looking forward to being part of a great night in Kokomo,” said Stewart, who will drive the TSR No. 14 Rush Truck Centers/Arctic Cat/Ford Performance J&J. “Racing on Friday night is a tradition in Indiana. When I was growing up, we spent the weekends chasing races at dirt-track races Friday, Saturday and Sunday. And, for the event to be in May, it just makes it that much more special. I raced there a few years ago with the World of Outlaws and the races were some of the best they had all season. The Arctic Cat All-Stars have a talented group of guys racing with them and I’m sure it’s going to be a great show. Hopefully, we can be part of something special and give all the Indiana fans something to be really proud of.”

The program will include a complete show of qualifying, heat races, dash events and feature race that pays $5,000 to the winner. The USAC SpeeD2 midgets will also be on the card. Stewart will be hosting a special autograph session at his merchandise trailer at 5 p.m. for those who purchase the first 150 tickets online. Fans are encouraged to purchase tickets in advance by visiting https://tickets.ticketforce.com/eventperformances.asp?evt=1528. Reserved seats are $30, general admission tickets are $25 and pit passes are $35. Children 10 and under are free – grandstand only. Hot laps are scheduled to begin at 6:45 p.m. More information is available by visiting www.allstarsprint.com.

Stewart returned to Sprint car racing in February with the Arctic Cat All-Stars at Bubba Raceway Park in Florida. The former NASCAR champion will compete with several series in both 410- and 360-cubic inch events throughout the season. He is a previous All-Star winner, scoring his first triumph with the series at Screven Motor Speedway in Sylvania, Georgia back in February 2012.

Keep up with Stewart’s progress in the TSR No. 14 Rush Truck Centers/Arctic Cat/Ford Performance J&J  during his return to Sprint car racing through the Web and social media this season. More information can be found at www.TonyStewartRacing.com, www.rushtruckcentersracing.com, www.arcticcat.com,www.fordperformance.com, and www.tonystewart.com.
Tony Stewart Racing: Facebook at www.Facebook.com/TonyStewartRacing or on Twitter and Instagram @TonyStewart_Rcg.
Tony Stewart: Facebook at www.facebook.com/TonyStewart or on Twitter @TonyStewart.