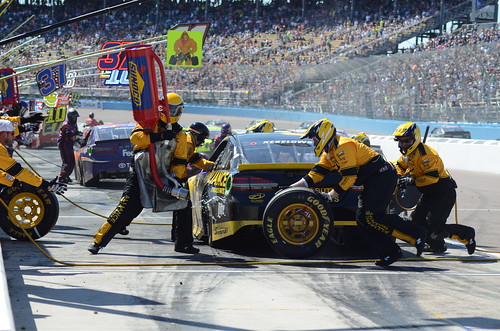 Recap: Brad Keselowski and the No. 2 Alliance Truck Parts Ford Fusion team scored their third-consecutive top-five finish in the Monster Energy NASCAR Cup Series (MENCS) by finishing fifth in Sunday’s Camping World 500 at Phoenix Raceway. After starting the race from the sixth position, Keselowski quickly moved into the top five on the second lap of the race by showing a strong No. 2 Ford. The 2012 MENCS champion was routinely the fastest car throughout the early portion of the first 75-lap stage of the race, but could not pick up all of the track position necessary to win the stage, finishing second. After needing help turning just past the center of the corners, crew chief Paul Wolfe worked on air pressure and wedge adjustments throughout the second stage of the race. This allowed Keselowski to carry speed longer throughout a run and he crossed the finish line at the end of the second stage in the fifth position. While running in the second position at lap 237, Keselowski radioed that he felt a vibration in one of the corners of his Alliance Truck Parts Ford. Instead of hitting pit road immediately and giving up valuable track position, he continued to turn fast laps while monitoring the severity of the vibration. Fortunately, the caution flag came out 20 laps later and Keselowski was able to bring his Ford down pit road for service that alleviated the vibration. After staying inside the top five for most of the day, Wolfe elected to make a two-tire stop when the final caution flag flew at lap 308, setting up an overtime finish. After a valiant effort, Keselowski was able to score his first top-five finish at Phoenix since the fall race of 2014.

Quote: “We ran kind of right in that second to fifth range the whole day with the Alliance Truck Parts Ford. We clawed away. I thought we might have had a shot at getting the win but the 18 car was just a touch better. We were all real close there. Whoever got the track position was going to run away. The clean air was so important which was a bit frustrating. There was a lot of parity today and of course the crazy finish there at the end with the yellow coming out when it did and all the different strategies.”

Recap:  Joey Logano started from the pole position but finished 31st in Sunday afternoon’s Camping World 500 at Phoenix Raceway after a blown tire ended the day for the No. 22 Shell-Pennzoil Ford at lap 307 of the 314-lap event. After starting from the pole, Logano dominated the opening stage of the race, leading all 75 laps en route to the first stage victory of the season for the No. 22 team. Despite being out front, Logano battled tight handling conditions in the center of the corners, while fighting loose on corner entry. On the first pit stop at lap 28, crew chief Todd Gordon called for air pressure adjustments and four tires. The No. 22 Shell-Pennzoil crew completed the service and kept the lead for Logano, which would prove critical in securing the stage victory as track position was imperative on the slick Phoenix Raceway. At the end of the first stage, the team pitted again, this time for wedge, air pressure and pulling tape from the nose of the car in an effort to help cool the brakes. Logano was still battling loose conditions on corner entry, but the handling had improved through the center of the corner. On the ensuing restart, Logano surrendered the lead as two competitors split him three wide entering turn 1. From there, the handling conditions deteriorated as Logano had to battle dirty air. The team ran in the top-five until a lap 118 pit stop where NASCAR deemed the No. 22 too fast upon entering his pit stall. Logano and the team would have to battle back from the 22nd position when the race resumed. With solid pit work and positive adjustments on the handling of the No. 22 Shell-Pennzoil Ford, the team was able to reach the top 10 late in the race. Again, Logano found himself battling an ill handling racecar and on Lap 307, the right front tire went down, leading to heavy contact with the turn 1 wall, ending the day for the team. The result was disappointing for the team after leading the first 82 laps and winning the first stage of the event.

Quote:  “The brakes are fine, we just blew a right front. Probably just overheated the bead. I am sure that is what it was. There is not much you can do when the right front blows out. We had a good car in the beginning of the race and then just fell off and got a pit road speeding penalty and it was hard to get back up there. We were getting closer but our long run speed was off. We have to figure out how to get faster here on the long run.”