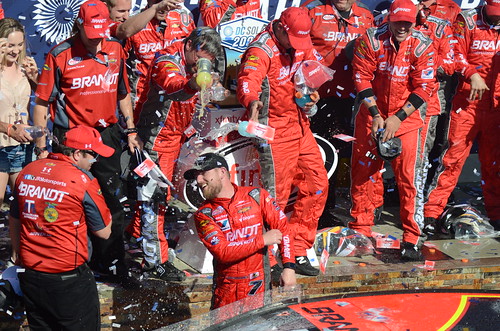 But you can forgive the driver of the No. 7 JR Motorsports Chevrolet if he was a trifle rusty with his donuts—Allgaier hadn’t been to Victory Lane in the NASCAR XFINITY Series since August in 2012 at the road course in Montreal.

On a blistering afternoon that brought emotions to a boil at the one-mile race track in the Sonoran Desert, Allgaier sailed away with a magnificent restart with four laps left and finished .741 seconds ahead of runner-up Ryan Blaney, who started 33rd after inspection issues kept him off the grid during qualifying earlier in the day.

“You have no idea how proud I am of you,” Allgaier radioed to his team after he crossed the finish line and broke an 80-race drought.

After climbing from the car, Allgaier began to digest what he had just accomplished, not the least of which was claiming the $100,000 bonus in the first Dash 4 Cash race of the season. The victory was Allgaier’s fourth in the series.

“Last year was tough,” Allgaier said of a winless 2016, his first year with JRM. “We had really good runs all year but we weren’t able to get to Victory Lane. This was the same group of guys we had last year, and to be able to do it here in Phoenix and win the first Xfinity Dash 4 Cash race…

“This is a team effort. We had four really good JR Motorsports hot rods out there.”

“He over-drove the corner and took us out with it,” Dillon said after exiting the infield care center.

Dillon wasn’t particularly apprehensive about the meeting with NASCAR.

“We’ll probably just have a Coke and discuss things,” he said optimistically.

“It was 100-percent my fault,” said the Sunoco rookie driver. “I got in there too deep, got really loose going in and couldn’t put any wheel into it. That was pretty much it. Just all my fault. Something that won’t happen again. We had a great race leading up to that.

“We didn’t start out at all how we wanted to, but by the end we were probably a fifth- to eighth-place car. I thought that was a really good sign for us. I thought we had a really good Haas Automation Ford.

It’s unfortunate I cost us and the 2 car there.”

Under the circumstances, Custer wasn’t surprised at Dillon’s retaliation.

“It definitely sucks for us points-wise, but I guess you can kind of expect that when he gets taken out,” Custer said. “I can understand how frustrated he is about it. It is what it is. I will try not to have that happen again.”

Check out the unofficial results of the DC Solar 200.