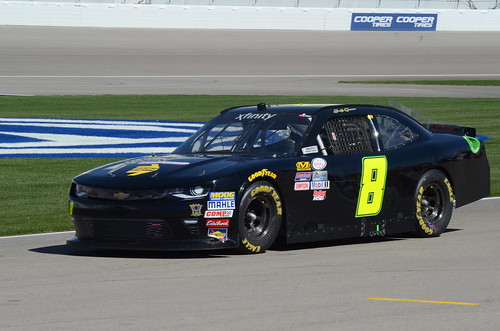 Mills will drive the No. 8 Thompson Electric, Inc. Chevrolet under the watchful eye of veteran crew chief Keith Wolfe.

Founded in 1977, Thompson Electric, Inc. is a diverse full service electrical contractor with highly trained and experienced crews that can perform any electrical task.

Whether it’s constructing or maintain substations, transmission or distribution lines, providing emergency storm restoration, lighting the highways and controlling traffic flow, or installing and maintaining the electrical systems within your facilities, no job is too small or too large.

Mills, 19, will make his first XFINITY Series start at Phoenix, but second at the 1.0-mile oval after competing in the NASCAR Camping World Truck Series (NCWTS) last November for SS-Green Light Racing (SSGLR).

Before a leading path to NASCAR, Mills started his racing career in 2009 competing in Junior Champ Karts near home winning Rookie of the Year. From there, he transitioned into asphalt and dirt Late Models before making the jump in 2015 to the JEGS / CRA All-Star Tour driving for Rick Turner Racing.

“This is a great opportunity and I’m excited, yet humbled to be making my NASCAR XFINITY Series debut,” said Mills. “I’m hoping that my prior experience at Phoenix should be to some benefit to myself and the B.J. McLeod Motorsports team. I’m thankful to continue to have the support of Thompson Electric, Inc. and GraphicSurge Media. I’m really hoping for a good result on Saturday afternoon.”

Mills also hopes to be able to lean on teammate and team principal B.J. McLeod, who will drive the team’s flagship entry in the No. 78 Hermansen’s Mill Chevrolet.

Hermansen’s Mill is a 102-year-old business that began operations in 1914 as a grain roller mill, by Marcus Hermansen has been passed down from father to son. The mill stopped rolling grain in early 1970 and became an agricultural supply house, with feed, seed, fertilizer, lawn and garden products for local farmers and homeowners.

“I’m looking forward to seeing Matt have a great XFINITY Series debut on Saturday,” said McLeod. “He is a sharp kid who takes his racing very seriously and is anxious to learn and succeed. I think with prior experience at Phoenix, it offers the chance to make that transition that much smoother.”

McLeod, a native of Wauchula, Fla. will make his fourth career XFINITY start at Phoenix Raceway.

Starr, the Houston, Tex. native is set for his fifth career XFINITY Series showing in the Sunset State, aboard the No. 99 Striping Technology Chevrolet.

For Phoenix, B.J. McLeod Motorsports is proud to welcome the additional support of ICE-FROST and @CouchCrewChief who will serve as associate marketing partners for the team’s 37th career XFINITY Series race.

Be sure to follow B.J. McLeod Motorsports on social media; Facebook.com/bjmsinc, on Instagram (@BJMcLeodMotorsports) and on Twitter@TeamBJMcLeod.

Founded in 1977, Thompson Electric, Inc. is a diverse full service electrical contractor with highly trained and experienced crews that can perform any electrical task. Whether it’s constructing or maintain substations, transmission or distribution lines, providing emergency storm restoration, lighting the highways and controlling traffic flow, or installing and maintaining the electrical systems within your facilities, no job is too small or too large.

ICE-FROST (ice-frost.com) is a combination of environmentally safe minerals that when added to the ice in your cooler, will take the temperature down from 30° (that’s the average ice temperature in a cooler) to a frosty -10°.

Extend the life of your ice.  Turn your cooler into a freezer.  Made in the USA.

Six years ago, Jonathan Gruenke, started the twitter handle @CouchCrewChief as a fun race day gag. In the following years, it has grown to include in-race updates and a motorsports blog focused on new drivers, new teams, and road crew members who sacrifice to entertain the motorsports fans.

About B. J. McLeod Motorsports:

B.J. McLeod Motorsports (BJMcLeodMotorsports.com) is an American professional stock car racing team that currently competes in theNASCAR XFINITY Series. The team is owned by B. J. McLeod and wife Jessica. The team will field three Camaro Chevrolets in the D.C. Solar 200 at Phoenix Raceway with drivers Matt Mills (No. 8), B.J. McLeod (No. 78) and David Starr (No. 99).