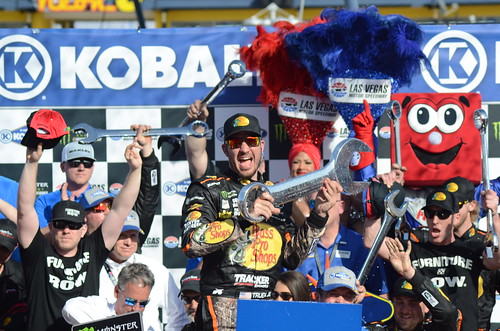 In a race whose aftermath left hometown driver Kyle Busch with a bloody forehead, Martin Truex Jr. passed the faltering car of Brad Keselowski on the white-flag lap and cruised to a sweep of all three stages in Sunday’s Kobalt 400 at Las Vegas Motor Speedway.

As Truex approached the checkered flag to win a Monster Energy NASCAR Cup Series race for the first time this season and the first time at LVMS, Joey Logano’s Ford slid up into Kyle Busch’s Toyota in a battle for third position. Busch spun into the inside wall on pit road and limped across the finish line in 22nd place.

Logano salvaged fourth behind Truex, runner-up Kyle Larson and Chase Elliott, but the battle wasn’t over when Truex took the checkers. Busch hustled up pit road to confront Logano and threw a punch at Logano’s head.

Logano’s crew stepped into the fray, and took Busch to the pavement. In the melee, Busch sustained a bloody bruise to his forehead.

That battle stole some of the thunder from the afternoon-long battle between the dominant cars of Truex, who led 150 of the 267 laps, and Keselowski, who led 89.

Keselowski appeared well on his way to his second straight Monster Energy NASCAR Cup Series victory when he radioed suddenly that something had broken on his No. 2 Team Penske Ford. As Keselowski slowed on the next-to-last lap, Truex passed him off Turn 2.

Busch and Logano ducked to the inside to avoid Keselowski on the backstretch and made contact as they approached Turn 3. Logano drove hard into the corner and couldn’t keep his car beneath Busch’s through Turns 3 and 4.

But if Busch and Logano came to blows, Truex had nothing but reason to celebrate his serendipitous victory in the newly redesigned 2018 Toyota Camry. This win was his eighth in the series, with four coming last year, and he became the first Cup driver to sweep all three stages of a single race under the competition format adopted this season.

“We definitely had our share of races where we’ve dominated and gave one away, and it looked like today was going to be another one of those,” said Truex, who fell behind Keselowski after a restart on Lap 259. “The runs just didn’t work out the way we needed them. We were struggling on the really long runs.

“We had to run that last set of tires on that last caution longer than we did all race long (from Lap 211 until caution for Danica Patrick’s blown engine on Lap 252. I was out of control, and Brad was really good on the long run. I hate that he had problems. He was strong and we weren’t going to do anything with him, but then he lost the brakes or something. A little bit of a gift, but we’ve given some away, so it feels good to come out on the good end for once.”

Keselowski, who held on to the fifth spot, was on the receiving end of a gift last week in Atlanta, when Kevin Harvick sped on pit road and surrendered the lead late in the second Monster Energy NASCAR Cup Series race of the season. Accordingly, the driver of the No. 2 Ford was philosophical about the change in fortunes at Las Vegas.

But he didn’t know precisely what had happened to his car.

“No, they’ll have to take it apart,” Keselowski said. “At the end, we have to go to inspection and stuff, so we’re not allowed to look. I just know it was something major. It wouldn’t turn and I lost brakes, so that’s a pretty good indicator, but that’s the way it goes.  That’s racing and that’s why you watch until the end and you never know what’s going to happen.

“It’s frustrating, but you put yourself in position to win and good things will happen. That happened to us last week and didn’t happen this week, so you just pick up the pieces and move on. Luckily, they’re really big pieces. We’ve got a lot to be proud of.”

Check out the unofficial results of the Kobalt 400.