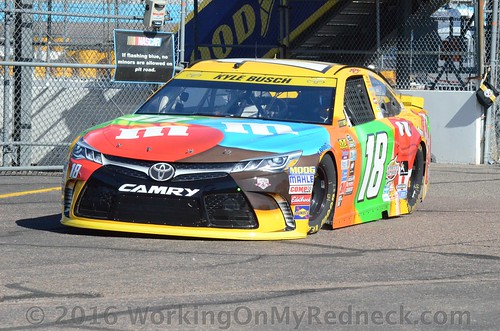 Harvick led 292 laps at Atlanta and dominated the race before a late pit road speeding penalty opened the door for Keselowski. Coming to Sunday’s Kobalt 400 at Las Vegas Motor Speedway (3:30 p.m. ET on FOX), Harvick, Busch and Keselowski were 1-2-3 in the series standings.

Keselowski backed that up with a pole-winning run at LVMS on Friday.

The performance of the Fords early this season is a radical departure from 2016, when the Toyotas of Joe Gibbs Racing and Furniture Row were the dominant cars through the first half of the regular season.

Thus far in 2017, Kyle Busch won Stage 1 in the Daytona 500, Denny Hamlin won the second Can-Am Duel at Daytona, Matt Kenseth rallied from a lap down to finish third at Atlanta, and Martin Truex Jr. qualified on the outside of the front row on Friday at Las Vegas.

Otherwise, the highlight reel has been underwhelming for the Camrys, but Kyle Busch says there are mitigating circumstances for the spotty performance.

“I think there was a good run going for Erik Jones, actually, last week (14th at Atlanta),” Busch said. “He probably should have finished sixth to eighth, ninth maybe, somewhere in there. And you know, the 78 car (Truex) was running okay, as well, too. I don’t know where the rest of our cars were running. Obviously, Matt (Kenseth) had a decent day. He was able to overcome a couple penalties and get back to where he needed to be. There’s some strength there.

“For me in the 18 car, though, we’re just lacking the ability to have the amount of front turn in the race car that I’m looking for because of this lack of downforce. They took a lot of front downforce away from the car (under 2017 rules), and apparently, I rely heavily on that being able to cut through the corners. We’ve got to get a little bit better aero platform going, balance wise, aero balance, as well, through the corners and figuring out how to do all of that through our setups in the race car.”

Compounding the loss of roughly 500 pounds of downforce this year is Toyota’s introduction of a new Camry race car. Not surprisingly, there have been some growing pains.

“I don’t think that this was a surprise to anyone that the lower-downforce package was going to hinder anybody,” Busch said. “We all knew it and expected it, and we worked on it through the offseason as best we could to get ready and prepare. But there’s some other groups that maybe have done a better job of preparing for it than we have.