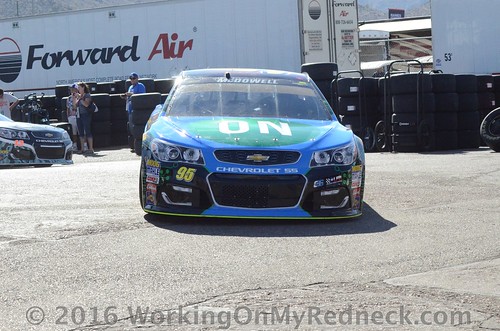 This week, McDowell and LFR look to bounce back from their 29th place finish at Atlanta Motor Speedway after fighting adversity in the Folds of Honor QuikTrip 500.

Although McDowell recognizes the difficulty of having a small team on the West Coast swing, he is looking forward to this part of the MENCS schedule.

“I think no matter what, going to the West Coast is difficult for the teams, especially small teams when most of the guys that are working at the shop are also coming to the race track,” said McDowell. “To switch cars out and to do the swap and all those things is hard. We don’t have an extra hauler and all this other stuff, so it’s definitely a challenge. I like the schedule, though. It’s good for a lot of reasons. One, is there are not a lot of places on the East Coast this time of year that are going to be nice to race in. Going to Daytona and Atlanta and then being able to go to Vegas, Phoenix and California where the weather is nice, is an important part of the schedule. There are just a lot of moving parts.”

McDowell also notes some of the challenges that Las Vegas Motor Speedway brings to all competitors on the circuit.

“As far as racing at Las Vegas, that track is treacherous, it’s fast, it’s hard, it’s windy and it’s dusty,” McDowell stated. “The track changes throughout the day, and it’s a challenge. There are not a lot of places where you see guys spin out by themselves, and Vegas is one of the places where it’s easy to do.”

LFR is also excited to have United States Air Force (USAF) TSgt. Allan Habel join the crew for the weekend of the Kobalt 400. TSgt. Habel is the crew chief for the USAF Thunderbirds and will have a chance to shadow LFR’s crew chief Todd Parrott, as well as the crew, as he gets the opportunity to trade in his USAF Thunderbird Jumpsuit for an LFR crew shirt.

“I am really looking forward to getting a chance to see the behind the scenes portion of what goes on during a typical race weekend for the whole crew,” said Habel. “Being a crew chief myself, it is very exciting to be able to work alongside the team in the garage and have a huge opportunity to learn a lot of things from all of them.

As a Thunderbird crew chief some of my responsibilities include performing scheduled inspections, functional checks and preventive maintenance on tactical aircraft and aircraft-installed equipment, maintaining and repairing all parts of the aircraft and ensuring that the aircraft are properly serviced with fuel, oil, and hydraulic fluid. The best aspect about my current job is that I get to be the voice for everyone in the section and make sure that they are taken care of with whatever they need.  Being able to look after and personally take care of everyone, just as a NASCAR crew chief does, is very rewarding, and I really enjoy doing it every day.”

The Kobalt 400 at Las Vegas Motor Speedway will take place on Sunday, March 12 at 3:30PM ET. Race fans can tune-in to FOX for race coverage and follow @LFR95 on Twitter for updates.