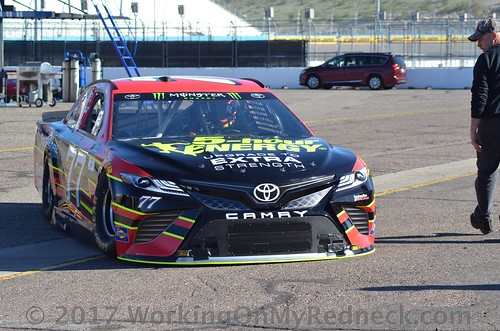 There’s something special about returning to a racetrack where you already know your way to the winner’s circle!

Erik Jones and Furniture Row Racing’s No. 77 5-hour ENERGY Toyota Camry team prepare this week for the 20th annual Kobalt 400 at Las Vegas Motor Speedway with perhaps a bit of an edge despite his first time there for a NASCAR Cup Series event. In 2014, Jones earned his second NASCAR Camping World Truck Series victory in just his first race at the 1.5-mile tri-oval located fewer than 20 miles northeast of the famed Las Vegas Strip. Driving for Kyle Busch Motorsports, the then 18-year-old led the race twice for 19 laps, including the final 14 to the checkered flag.

“Las Vegas Motor Speedway is a track that I enjoy and winning there in 2014 in the NASCAR Camping World Truck Series definitely helps my confidence,” said Jones. “We’re looking to getting back into the top 10 there in the No. 77 5-hour ENERGY Toyota Camry and being more competitive as the weeks go by and I get more experience in the NACAR Cup Series cars.”

Last week at Atlanta Motor Speedway in just the second race of his rookie season, Jones started 23rd and moved into the top 15 by lap 76, running in the top 10 during the majority of the second half of the race. A chassis adjustment on the final pit stop with 14 laps remaining caused the handling to get too tight and he finished 14th.

“Racing as well as we did at Atlanta definitely helps my confidence headed into Las Vegas and the rest of the NASCAR Goes West swing,” Jones continued. “We ran well most of the day and felt like we should have finished better but it just didn’t work out on the last restart. It was the first time our Furniture Row Racing team really had a chance to see what we have so we just need to keep building each week. We’re working on what our 5-hour ENERGY Toyota Camry needs to go fast. I just want to figure out more on my end — what to ask for and when to ask for it.”

The 267-lap Kobalt 400 will consist of three segments of 80, 80 and 107 laps (laps 80/160/267). In each of the first two segments drivers finishing in the top-10 will receive championship points (10 to 1) with the winner receiving one playoff point. The overall race winner will earn 40 championship points and five playoff points. Playoff points accumulated during the season will carry through the first three of the four playoff rounds.