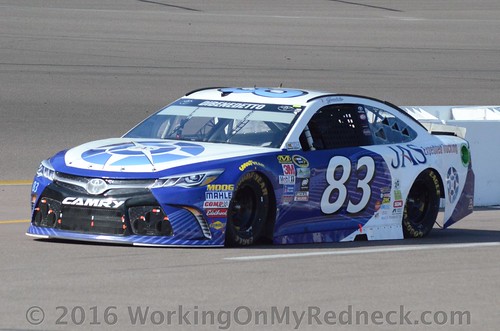 When #NASCARGoesWest next week, an honorary hauler driver will be along for the ride.

JAS Expedited Trucking is heading out West with BK Racing to sponsor the No. 83 Toyota Camry of Corey LaJoie in the Kobalt 400 at Las Vegas Motor Speedway March 12, 2017. Following the race, Tony Freeland, Owner of JAS, will also be riding in the BK Racing haulers as they make their journey from Las Vegas, Nevada, to Phoenix, Arizona, and he is asking fans to ride along with him via social media.

JAS Expedited Trucking, LLC is a small, family-owned expedited trucking company, located in Imlay City, Michigan. After 13 years of driving for other small fleet owners, Freeland decided to purchase his first truck. With experience as both a driver and as an owner/operator, he thought he could provide a better environment for other drivers, so he started JAS Expedited Trucking and their second truck was purchased one year later.  The company has since continued to grow. JAS is currently looking for qualified I.C. professional drivers to join and expand their team. Interested applicants can visit JASNW.com for career opportunities.

Coming from a background as a truck driver, Freeland has formed a friendship with the BK Racing hauler drivers Steve Lawson and “Mad Man” Mark Konzer, and BK Racing Transportation Manager Paul “PeeWee” Rice. So when Tony asked to ride along for part of the NASCAR “West Coast Swing,” the drivers welcomed him with open arms.

“I am probably one of the few sponsors who really understands the hard work that these hauler drivers do,” said Freeland. “Without them, there would be no show. I’ve had a great time getting to know Corey LaJoie, and I’m very proud to be on board his No. 83 and see what he can do at Las Vegas Motor Speedway. Once the checkered flag flies, however, I want to shift the spotlight onto the other talented drivers who make this sport possible.”

“I ran well last year at Vegas in an Xfinity Series car, so I’m pumped about driving the JAS Expedited Trucking Camry there,” said LaJoie. “I love working with Tony Freeland, and to see him being involved with the race team by being an honorary co-driver of the hauler is really neat.”

“JAS Expedited Trucking has become such an amazing partner for this team,” said Doug Fritz, Chief Marketing Officer of BK Racing. “I’m very eager to see the JAS No. 83 back on track. Tony has become a member of our BK Racing family, and I can’t wait to follow his trip to Phoenix.”

Fans can follow Tony’s journey via the BK Racing and JAS Expedited social media handles, or by following the hashtag #JASGoesWest.

JAS Expedited Trucking, LLC is a transportation company that specializes in hauling expedited freight nationwide. We are leased to Panther Premium Logistics. Growth throughout the last 13 years is mostly credited to our I.C. professional drivers. Future growth highly depends on building a larger I.C. professional driver team that supports and represents JAS Expedited Trucking values. We are currently looking for qualified I.C. professional drivers to join and expand our team while growing with us and sharing the wealth! If you have what it takes, visit our website at JASNW.com for career opportunities. Follow JAS on Twitter @JASExpedited, Facebook, and Instagram @jasexpedited