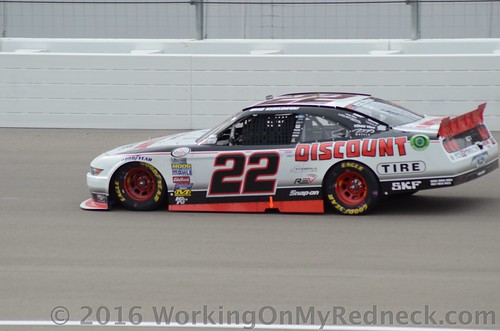 Recap: Brad Keselowski and the No. 22 Discount Tire Ford Mustang team continued its strong start to the 2017 NASCAR XFINITY Series (NXS) season with a second-place finish in the Rinnai 250 at Atlanta Motor Speedway (AMS) on Saturday afternoon. The 2010 series champion began the race from the third position, but quickly moved into the top spot by the eighth lap on a strong, outside move around the No. 18 of Kyle Busch. Keselowski would lead until the end of the first, 40-lap stage to pick up the first stage win of his career, along with the 10 regular season points that come with that finish. As the second stage began at lap 48, Keselowski continued to show strong in running the high line around the abrasive AMS circuit before giving way to the No. 41 Ford of Kevin Harvick at lap 62. He would continue his strong run inside the top five throughout the second stage to pick up nine additional regular season points. Over the final laps of the final, 83-lap stage Keselowski was able to pull close the rear bumper of eventual race winner Busch, but lapped traffic proved to be a tall task in trying to move into the lead. Keselowski crossed the finish line in the second position to give the Discount Tire team consecutive top-five finishes to start the season, helping the team take the lead in the NXS Owners Points Championship standings.

Quote:  “It was a good race today for the Discount Tire Ford team. We had a really good car today and some good adjustments at the end to pick up a little speed. I thought the 41 was class of the field and I don’t know what happened there to mix him up. Kyle and I had a great battle there at the end. It was just a matter of kind of catching the breaks in traffic and making the right moves. I thought we were a tiny bit faster than Kyle but I kept catching traffic in the wrong spot. That was a bummer but still a solid effort and a good day and I am proud of my team.”