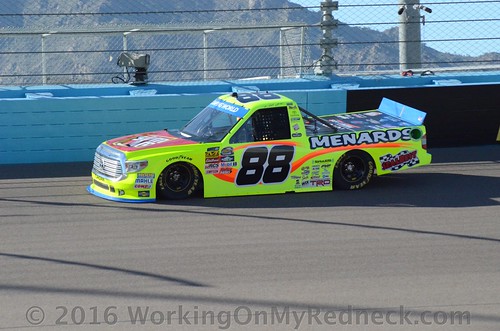 Battling a Toyota Tundra that was “tight through the center and off the corners,” Crafton and crew chief Carl “Junior” Joiner, worked on the handling of his Menards Toyota Tundra throughout the event. In the closing laps, Crafton would lead the 32-truck field twice for two laps, but fall to second with 11 laps to go, and the 2015 AMS race winner would eventually cross the stripe second, behind race winner, Christopher Bell. The solid run was Crafton’s fifth top-five finish at AMS.

Was there anything you could have done to catch Christopher Bell?

“No, we had a really good one right there. I thought we were going to pull it off. I could hear him down there spinning the tires. I thought to myself, ‘just keep spinning them.’ But, we had a shot, and at the end of the day, that’s what it’s all about. We had a shot at them on that last restart, and it was close. This Menards Toyota Tundra was good, but it wasn’t great. We just lacked on short run speed. The 4 truck definitely had us on that, but if anybody’s listening at Atlanta Motor Speedway, I think we need to start a driver’s council. Please do not repave this race track. This is by far the coolest race track that we race on – you can move everywhere. Did you see where we ran? I mean on the yellow line, the middle of the race track, against the fence – it was great racing, and that’s what it’s all about – when you have good old asphalt like that and put on a great show for everybody.”