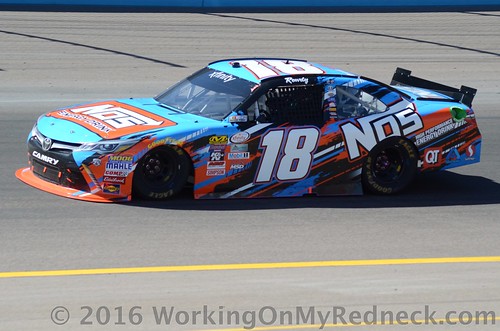 It took him one more year to get the second!

The pole winner at Atlanta for the sixth time, Busch pulled away after a restart on Lap 148 of 163 and beat Brad Keselowski to the finish line by .605 seconds to score his second straight victory at the 1.54-mile track in Saturday’s Rinnai 250.

“It took so long to get here to begin with,” Busch said in Victory Lane. “Now we’ve won two in a row. We weren’t great to begin with, and we weren’t great in the middle, but (crew chief) Scott Graves and the guys keep working on the car throughout the race and brought the No. 18 (Toyota) to life there at the end.”

Busch was first off pit road under the fifth caution of the afternoon after Kyle Larson, the leader entering pit road, nearly collided with Kevin Harvick, the dominant driver for most of the race with 64 laps led. The near-miss cost both drivers a fraction of a second—enough for Busch to exit with the lead.

“I can’t say enough about my pit crew,” Busch said. “They did an awesome job getting me off pit road first for that final run.”

The victory was Busch’s 87th in 329 starts, extending his own series record.

Both Larson and Harvick fell back on the Lap 148 restart and finished third and fourth, respectively. Elliott Sadler, who ran fifth in the No. 1 JR Motorsports Chevrolet, had the best result among series regulars and leads the XFINITY standings by three points over Sunoco rookie William Byron.

Darrell Wallace Jr., Byron, Austin Dillon, Daniel Hemric and Cole Custer completed the top 10. Drawing a penalty for too many men over the wall on pit road, Custer restarted from the rear after a lap 118 caution for Denny Hamlin’s spin in Turn 1 but recovered to earn his top-10 finish in the No. 00 Stewart-Haas Racing Ford.

The race was contested in three stages, the first two of 40 laps each before an 83-lap final stage. Keselowski, a Monster Energy NASCAR Cup Series regular, won the first stage, earning a playoff point for the No. 22 Team Penske Ford.

Harvick won Stage 2 convincingly, but his car tightened up in the final third of the race, as shadows covered Turns 1 and 2.

As a full-time monster Energy NASCAR Cup Series driver, Busch is ineligible to earn points in the XFINITY Series, but his victory was worth five playoff points on the owner’s side to the No. 18 Joe Gibbs Racing team.

Check out the unofficial results from the Rinnai 250.