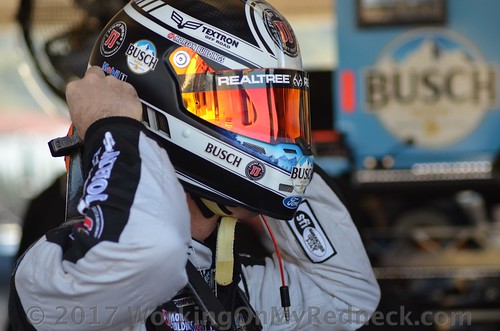 Kevin Harvick saved his best lap for the best possible moment on Friday afternoon, putting his No. 4 Stewart-Haas Racing Ford on the pole for Sunday’s Folds of Honor QuikTrip 500 at Atlanta Motor Speedway (2:30 p.m. ET on FOX).

In the third and final round of knockout qualifying for the second Monster Energy NASCAR Cup Series race of the season, Harvick toured the 1.54-mile track in 29.118 seconds (190.398 mph) to post the fastest lap of the entire qualifying session.

“In the last run there, I was able to carry more speed and do some things with the car that I wasn’t able to do in the first two runs,” Harvick said. “At that point I just didn’t want to screw it up, because I felt like I’d gotten to the green, which I didn’t do in the second round.

“I got to the green good, I got through (Turns) 1 and 2 good. I just needed to hit the bottom and get that left front on the line so that it would hook and get up off the corner. That was by far the best of the three laps, and we saved it perfectly for the end.”

Newman, who hasn’t won a pole since the fall race at New Hampshire in 2013, failed to add to his career total of 51 and failed to break his tie with the late Buddy Baker for most poles at Atlanta (seven). Newman’s No. 31 Richard Childress Racing Chevrolet was second fastest behind Kyle Busch’s No. 18 Toyota in the opening round of the time trial and fastest in the second round.

“We were so close,” Newman said. “I really wanted to beat my old buddy Buddy Baker’s record there. Been tied with him for a while, so that was kind of rough. But I’m just proud of the guys and proud of the effort. It is the litmus test for us for a lot of the rest of the season. It was a good start for sure.”

Four cars failed to make qualifying attempts because of inspection issues, and another — the No. 33 of Jeffrey Earnhardt — had engine issues. Accordingly, Earnhardt, Michael McDowell, Cole Whitt, Derrike Cope and Cody Ware will start from the final five positions in the 39-car field.