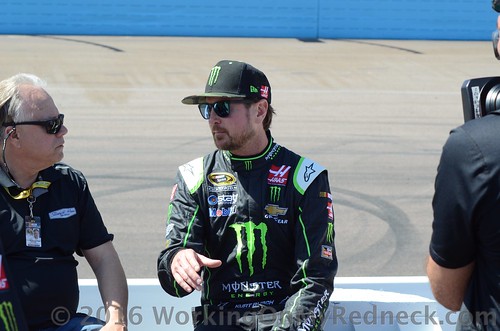 The club comprised of drivers who have won both the Daytona 500 and the Indianapolis 500 currently has two members – Mario Andretti and A.J. Foyt. Period!

Kurt Busch, who won the Daytona 500 last Sunday, may have his sights set on joining that exclusive clique.

Three of the of the congratulatory texts Busch received after the Daytona win came from the Andretti clan – Mario, Michael and Marco. It was Michael, you’ll recall, who fielded the Andretti Autosport entry Busch drove to a sixth-place finish in the 2014 Indianapolis 500 in his only IndyCar start.

“It’s amazing to have the camaraderie and the ability to have open conversations with legends like Mario Andretti,” Busch said on Friday at Atlanta Motor Speedway. “I saw Mario’s (text), because his came in early Monday morning. I haven’t talked to Michael about things. I haven’t talked to Marco.

“The emotions of this event, yes, it fits right in when I won in 2014 at Martinsville early in the year. It gives you that calm sense that I can go focus on other things and have the ability to go run theIndy 500. I haven’t talked to Michael. I haven’t reached out to any other team. My focus has been to settle in with Ford and get 2017 underway and to give my full focus to the Stewart-Haas race team.

Though Busch seems eager to try the Indy/Charlotte double again at some point in his career, scheduling obligations are likely to preclude the possibility this year.

“It will be difficult at this point, with a Daytona 500 win, and the emotions and the amount of responsibility that comes with it,” Busch said. “The Ford executives called me and asked, ‘What dates do you have available to come up to Dearborn, Michigan? We want to bring our winning Ford GT drivers from Le Mans and from the Daytona 24 Hours up for a big day at Ford.’

“The schedule is getting full. The month of March, we’re on that West Coast run. I think my first day that anything isn’t scheduled is April 5th or something like that, and that’s on our way out to Texas. It’s a busy time. I don’t know if I’ll be able to run Indy this year, but it’s really neat to have the fraternity of IndyCar drivers reach out to me and celebrate with the 41 car.”