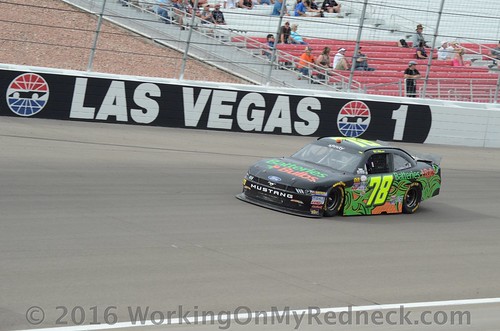 Las Vegas is close to getting a second top-tier NASCAR race at Las Vegas Motor Speedway beginning in 2018.

The Las Vegas Convention and Visitors Authority board of directors scheduled a special meeting Wednesday to consider a seven-year $2.5 million annual sponsorship agreement with NASCAR that would include the addition of a fall race at the speedway.

Since 1998, NASCAR has had a Las Vegas race, usually in March. This year’s race, the Kobalt 400, a part of the Monster Energy NASCAR Cup race series, is March 12.

While key figures aren’t talking specifics, the proposed contract that will be put to the 14-member board’s vote Wednesday provides some detail.

The sponsorship and marketing agreement would dedicate $1 million per race, plus $500,000 a year to market both the spring and fall races, beginning Jan. 1 for seven years with an option for three additional years.

The contract would be for “two NASCAR first-tier (currently Monster Energy NASCAR Cup Series) sanctioned races at the Las Vegas Motor Speedway every year during the term of this agreement.”

The agreement said the LVCVA would pay the first fee installment of the total $17.5 million commitment “beginning with the 2018 races.”

There are clauses in place to cancel payments if a race is canceled and not rescheduled, the race isn’t a first-tier NASCAR event or if it isn’t broadcast on a major broadcast or cable television network. The contract lists eight networks deemed suitable broadcast partners.

A representative of the LVCVA declined to answer detailed questions about the planned race, but issued a statement.

“The proposed NASCAR sponsorship will be considered for approval by our board of directors at the March 8 meeting,” the LVCVA’s emailed statement said. “Until the board votes on the proposal, it’s premature for us to comment on it. We have a great relationship with Las Vegas Motor Speedway and NASCAR and we look forward to continuing the partnership.”

“All of the information regarding a potential sponsorship opportunity between Las Vegas Motor Speedway and the Las Vegas Convention and Visitors Authority can be found at www.lvcva.com,” the emailed statement said. “When there is more information to provide, we will do so subsequent to the LVCVA board of directors meeting on March 8.”

It’s unclear whether the added Las Vegas race would be a new race or if a track that currently has two races would relinquish one. Currently, 13 tracks have two races a year and nine of those have second dates in fall months.

This could turn out to be a very interesting proposition.  If LVMS is awarded a second race, it most likely would require that SMI would have to drop a race at one of their other tracks to accommodate this.  Because it highly unlikely that NASCAR would add another race to it’s already jammed 36 race schedule.  SMI is the Bruton Smith owned corporation that operates Las Vegas Motor Speedway.