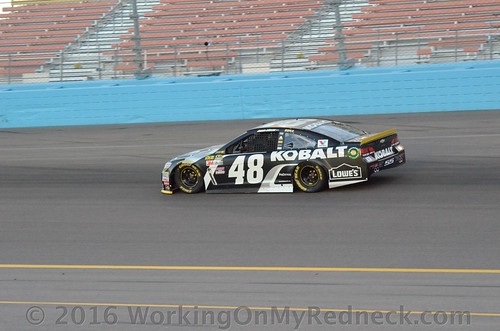 Georgia has been “peachy” to Hendrick Motorsports in recent memory.

The four-car outfit owned by Rick Hendrick has won the last three races at Atlanta Motor Speedway behind the efforts of Kasey Kahne (2014) and Jimmie Johnson (2015-16).

On Sunday, Hendrick Motorsports will go for its fourth consecutive win at the 1.54-mile track as it travels to AMS with Kahne, Johnson, Georgia native Chase Elliott and Dale Earnhardt Jr. for the Folds of Honor QuikTrip 500 (2:30 p.m. ET on FOX).

In addition to winning the last two races at Atlanta, Johnson has won there on three other occasions, leading active drivers with five victories.

“The racing surface, for one, and the banking. I think it’s the steepest 1.5-mile we run on,” Johnson said. “It’s always put up that short-run speed and then the age of the surface has given us the character that we all like in the track.”

Kahne hasn’t won since he took the checkered flag Labor Day weekend in the 2014 Atlanta contest. He’s started 84 races since then, but expressed confidence heading into Sunday’s race.

“You’ve got to have your car handling and driving the right way when you cross the bumps,” Kahne said. “You lose grip over a run a good bit, especially in the front-end of the car. Understanding all of those things and making them work, we’ve been able to have a lot of success over the years at intermediate tracks – especially Atlanta and Charlotte – and I want to have a lot more.”

Elliott from Dawsonville, Georgia, would love to earn his first Monster Energy NASCAR Cup Series victory at his home track after coming up three laps short of winning the DAYTONA 500. The 21-year-old Chevrolet driver has logged two career runner-ups.

“Atlanta will always be special to me and hopefully we can go there for a long time and try to have some good runs along the way,” Elliott said.

Earnhardt won at Atlanta in 2004, placed runner-up at the oval last season and finished third there in 2015. He’ll try to visit Victory Lane for the first time since the fall Phoenix race in 2015. The 14-time Most Popular driver wrecked out of the DAYTONA 500, after returning from injury in his first race since July of last year.

“It’s going to be a fun season and we’ve got pretty high spirits,” Earnhardt said. “I’m ready to get to Atlanta. The worn-out track surface with its bumps and swells makes it a real challenge. It’s pretty fun.”