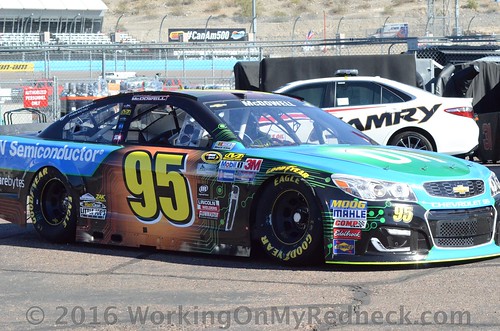 Despite running out of fuel with two laps to go, McDowell and LFR began “The Great American Race” on a strong note by quickly moving up from their 22nd place starting position into the Top-15 within just a handful of laps where McDowell would race for 139 of 200 laps.

After the first caution, McDowell made his first pit stop to tighten up the No. 95 K-LOVE Chevrolet SS, as it was sliding around the 2.5-mile tri-oval. After the adjustments, McDowell was able to work his way into the Top-10 where he would stay the majority of the race.

During the second stage of the race, McDowell raced side-by-side for most of the race and even narrowly avoided multiple wrecks, as spotter, Doug Campbell, helped McDowell navigate through the pack and into the Top-5.

McDowell raced in the front of the pack for the majority of the final stage while battling three-wide, until the No. 95 K-LOVE Chevy ran out of fuel with only two laps remaining in the 59th running of the Daytona 500. McDowell went on to cross the start/ finish line in 15thafter having the 5th most laps in the Top-15.

“We had a great race,” said McDowell. “We ran in the Top-10 and Top-5 all day long and had ourselves in a really good position. We dodged a couple of big wrecks and had a little bit of damage, but not too bad. Then we just ran out of fuel there with two to go. It’s unfortunate that we didn’t have a shot to make a run there at the end, but everyone at LFR did a really great job. We were really hoping to get our K-LOVE Chevy into victory lane or at least a top-5. I think we were pretty close to it.”

Crew Chief, Todd Parrott is proud of his team and looks forward to many more great runs this season.

“The whole LFR team did a great job today,” said Parrott. “We had some great pit stops and had a fast car, but we just came up a little short. We are definitely excited to get the 2017 season started after having such a great run.”

Next up for LFR and McDowell is the Folds of Honor Quicktrip 500 At Atlanta Motor Speedway on March 5 at 2:30PM ET.