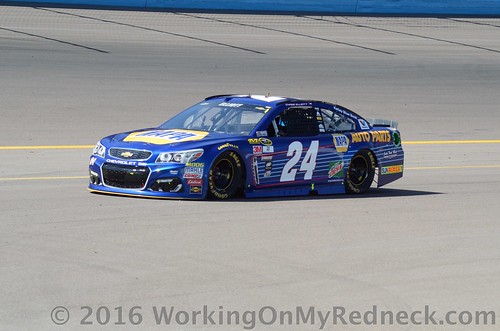 Chase Elliott thought he would be celebrating the first Cup victory of his career in the prestigious Daytona 500.

Instead, he wound up a passenger in a car driven by his father out the gates of Daytona International Speedway after a crushing defeat.

Elliott led 39 laps Sunday in the season opener and seemed to have control of the field until he ran out of gas and faded to a 14th-place finish. In the post-race confusion, he couldn’t be located for interviews and left the track without commenting.

It wasn’t a surprise — the 21-year-old was exceptionally hard on himself following several near-misses last season — but he quickly took to Twitter to express his thoughts. Chevrolet then distributed a statement on his behalf.

“It was a disappointing finish to a good day,” he said in the statement. “Just one of those things you can’t do anything about. I’m happy with how the NAPA team performed, and we are going to learn from it. I’m proud of how hard everyone worked all week. We’re looking forward to getting back at it in Atlanta.”

Elliott was seeking to become the first driver to win the pole, a qualifying race and the 500 since his father, Hall of Famer “Awesome Bill From Dawsonville” Elliott, accomplished the feat in 1985. Despite the loss, it was a very impressive showing for a driver who is still settling into his slot as the replacement driver for four-time champion Jeff Gordon.

Elliott last year won the pole for the Daytona 500 but crashed and finished 37th. It was nothing but steady improvement from there, and Elliott ended the year with 10 top-five finishes (a pair of runner-ups) and a spot in the playoffs. Still, he was extremely hard on himself every time he came close to a win, but came up empty.

“I mean, that’s the way he is. He wants to do so well,” friend and second-place finisher Ryan Blaney said. “He should have won two or three races last year. Things didn’t work out. Nothing of his fault. You get down on yourself. He’s going to win tons of races in his career. He’s going to win a lot this year.

“I can understand his disappointment, for sure. You’re leading the race. Looks like you’re going to win the Daytona 500. You know how he is, he’s very hard on himself.”

Race-winner Kurt Busch benefited most when Elliott ran out of fuel, but had no idea until hours after the race that Elliott’s empty gas tank contributed to Busch’s victory.

“I didn’t know that Chase ran out of gas. I hate that for him,” Busch said. “He definitely had the car to beat. The kid is going to be a superstar in this sport. Circumstances weren’t on his side.”

AJ Allmendinger, who finished third, also has a reputation of having a hard time with defeat. He gave Elliott a pass on his post-race demeanor.

“It’s hard to know how many chances you’re really going to have at the Daytona 500,” Allmendinger said. “Chase, you think, ‘OK, they’re going to have a lot of chances to win.’ He had a dominant car, so I can understand it. It’s hard.

“At times, yes, it’s our job. We got to go about it the right way. Sometimes we don’t. In the end, it’s our passion, it’s what we live off of. I can completely understand that.”

It is going to be a while before the sting from those turn of events that crushed young Elliott Sunday.  Nevertheless, we will be seeing this young gun in many Victory Lance celebrations hoisting up the hardware and feeling the thrill of victory. Unfortunately, Sunday Chase felt the agony of defeat.