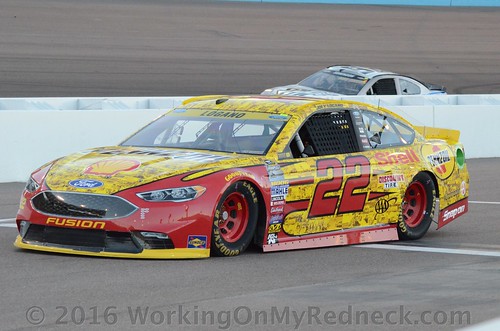 Recap: Brad Keselowski and the No. 2 Miller Lite Ford Fusion team finished 27th in Sunday’s 59th running of the Daytona 500 at Daytona International Speedway, a race where few cars finished the race unscathed. One of the early favorites to win the race based on his recent success on restrictor-plate tracks, Keselowski began the 200-lap race from the seventh position after finishing fourth in the first Can-Am Duel race on Thursday evening. The former series champion quickly raced his way into the top three and looked to have a car that could contend for the win. After finishing the first 60-lap segment in the fourth position to score seven regular-season points, Keselowski resumed racing action from the 12th position after a four-tire pit stop during the break. Throughout the race, he reported that he was happy with the handling of his Miller Lite Ford, but as is the case with restrictor-plate racing, he needed help to advance through the field. Keselowski was able to hook up with his teammates, Joey Logano and Ryan Blaney, as the final segment of the race began at lap 126, The trio rain solidly inside the top 10 for a few laps before the race was quickly halted for the second multi-car accident of the day. Shortly after the race restarted at lap 142, Keselowski himself was caught up in another accident featuring several cars. A brief attempt was made to try to make repairs to the No. 2 Ford, but a broken track bar was discovered to end his day after 143 circuits with a 27th-place finish.

Quote: “I just had nowhere to go after everyone started wrecking, but I almost made it through. We had just pitted and were running really well, right up at the front where we needed to be to be in contention for a solid finish and hopefully a win with the Miller Lite Ford. We had just pitted to make sure we wouldn’t get caught on strategy and all that but I guess everybody decided to wreck on the restart. That is unfortunate. We will get through it and go on to Atlanta. We did the best we could and controlled everything we could control on our own today.”

Recap: Joey Logano started 15th and finished sixth in the No. 22 Shell-Pennzoil Ford Fusion in Sunday’s Daytona 500 at Daytona International Speedway. Logano once again demonstrated his elite ability to manipulate the draft, working into the top-five by the ninth lap of the event. However, the top-five position would be short lived as Logano radioed crew chief Todd Gordon and reported a loose wheel at lap 14. Gordon brought the Shell-Pennzoil Ford to the pit lane, changing four tires and putting Logano on an alternate strategy. Logano remained on the lead lap with an assist from his Ford Performance teammates and Team Penske teammate Brad Keselowski. The first caution flag of the event came out at lap 27, allowing Logano to rejoin the rear of the field and come to pit road for a two-tire stop. The quick work of the team led to a gain of 15 positions for the Shell-Pennzoil Ford as Logano would move from 37th to 22nd. On the restart, Logano once again shot to the middle lane and regained position in the top-10 where he ran for the majority of the event. On the team’s pit stop at lap 61, the crew once again turned out a fast stop, gaining four positions on the race off pit road. When the intensity of the race increased following the second stage, Logano received minor damage to the right front fender, which the team repaired in just over two minutes on the pit lane. Crew chief Todd Gordon called the Shell-Pennzoil Ford to the pits for a two-tire stop at lap 151, the final stop of the day. Logano would restart in the second-position, taking the lead on the ensuing restart. Logano led the event for 16 laps on the afternoon as his Ford proved to be among the best in the race. With less than 20 laps remaining, Logano got shuffled from the lead and dropped outside the top-10, where he found minimal drafting help until the final five laps. When Logano finally found fellow Ford driver Ryan Blaney, the two set their sights on the top-five in the last five laps. To complicate matters, fuel became a major factor in the run to the checkered flag. On the final lap, Logano’s push sent Blaney forward to the second position, as the duo looked like they were in position to win. However, Logano’s Ford ran just short of fuel in turn 4 as it stumbled in the steeply banked turn. The No. 22 Shell-Pennzoil Ford regained power and finished in the sixth position. The sixth place finish, along with the second place finish in stage two earned the Shell-Pennzoil Ford the third position in the Monster Energy NASCAR Cup Series point standings.

Quote:  “I just couldn’t get anyone to go for it at the end. Everyone was so conservative and I don’t know why. We kept trying to go to the bottom and make a run down there and no one would go with us. We had three cars that kind of wanted to do it, but it’s a matter of getting the right run and getting the right cars behind us and we didn’t have enough of them and couldn’t get up to the lead pack.”