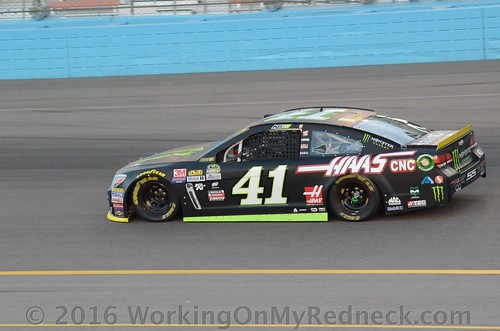 His car damaged in a wreck on the backstretch and held together with bare bond, duct tape, and probably some rubber bands, Kurt Busch grabbed the lead on the final lap of the 59th Daytona 500 on Sunday and took the checkered flag in the Great American Race as a capstone to a checkered career that has trended upward since Busch joined Stewart-Haas Racing in 2014.

In a race that featured the first test of a new three-stage race format in the Monster Energy NASCAR Cup Series — and featured enough twisted, crumpled sheet metal to keep fabricators busy for months — Busch surged to the front with a run around the outside when more than half the vehicles in an 11-car lead draft sputtered and ran short on fuel.

Having pushed other drivers to victory in the 500 on three previous occasions, Busch took the prize himself this time, finishing .228 seconds ahead of Ryan Blaney, who came from the rear of the lead pack on the final two laps.

AJ Allmendinger ran third after conserving fuel over the final 20 laps, as a race that had produced eight caution flags for 40 laps ran green for the final 47 circuits. Aric Almirola finished fourth as a single car for Richard Petty Motorsports, with Paul Menard and Joey Logano coming home fifth and sixth, respectively.

“I can’t believe it!” Busch shouted on his team radio after claiming the 29th victory of his career and by far the most significant. “I love you guys! Thank you! Thank you!”

Busch lost his rear view mirror in the middle of the final green-flag run, but it didn’t matter.

“There is nothing predictable about this race any more, and the more years that have gone by that I didn’t win I kept trying to go back to patterns that I had seen in the past,” Busch said. “My mirror fell off with 30 laps to go and I couldn’t even see out the back. And I thought that was an omen. Throw caution to the wind.

“It just got crazy and wild, and I am so proud of all the drivers at the end. We put on a show for a full fuel run, and nobody took each other out and it was one of the smartest chess games I have seen out there. All the hard work that Ford and SHR put into this — this Ford Fusion is in Daytona’s Victory Lane!”

Busch did what other drivers with seemingly stronger cars could not. Pole winner Chase Elliott was disconsolate after running out of fuel on the white-flag lap. He finished 14th.

Kyle Busch won the first 60-lap stage and collected the first playoff point in series history, but on Lap 105, he spun in Turn 3 when he cut a rear tire and collected fellow Toyota drivers Erik Jones and Matt Kenseth, as well as Dale Earnhardt Jr., who was returning to competition after missing the final 18 races of the 2016 season while recovering from a concussion.

Busch fell out of the race in 38th place. Earnhardt took his car to the garage in 37th.

Kevin Harvick led 50 of the 200 laps and took the second stage, but he fell victim on Lap 128 to the 17-car pileup on the backstretch that also did the most damage to the sheet metal on Kurt Busch’s car.  The 2014 series champion finished 22nd, three laps down.

Stewart-Haas Racing spent the winter converting from Chevrolet to Ford, but it seemed to make little difference to Busch, who won his 2004 series championship in a Roush Fenway Racing Ford.

“It was a crazy race, even crazier to sit and watch it from a pit box finally,” Tony Stewart said. “If I had known all I had to do was retire, I would have retired 17 years ago, if I knew it was what it took to win the race … I ran this damn race for 18 years and didn’t win it.

Check out the unofficial results of the 2017 Daytona 500.

One Comment on “Kurt Busch Grabs His First Daytona 500 Victory”