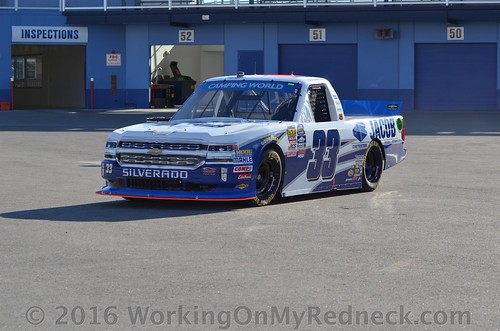 What happened between the first green flag and the checkers, however, could fill volumes.

That final wreck, ignited when Ben Rhodes spun from the outside lane off the bumper of ThorSport Racing teammate Grant Enfinger, wiped out veteran contenders Johnny Sauter, Timothy Peters and Matt Crafton.

But Grala — 18 years, 1 month and 26 days old — drove through the melee as trucks bounced off each other like pinballs on either side of him. Grala claimed the trophy for his first national series victory and the five playoff points that go with a race win under NASCAR’s new scoring system.

Austin Wayne Self took the runner-up spot, followed by Chase Briscoe, and the father-son combination of John Hunter Nemechek and Joe Nemechek in fourth and fifth.

“That was freaking awesome! I can’t believe we won Daytona,” Grala said in Victory Lane. “I couldn’t see a lot there. I knew it was a little bit risky. It was the last lap, and we had to do what we had to do.

“I saw coming out of (Turn) 2 it starting to get crazy. There wasn’t going to be any way I was going to be lifting (off the accelerator). I was just going to go low, cross my fingers and close my eyes a little bit.

“Luckily, it worked out for me. I just can’t believe it. It’s so surreal.”

Self put it much more succinctly.

“When all hell broke loose, we were in the right spot.”

The race didn’t wait until the last lap to get crazy. On the second lap, Briscoe, racing for the first time in the Truck Series, gave Noah Gragson’s Toyota an off-center tap on the rear bumper, sending Gragson bouncing off the outside wall in Turn 1 and out of control.

By the time the smoke cleared, 17 trucks — one more than half the field — had sustained varying degrees of damage in the wreck.

Gragson, Austin Cindric and Ryan Truex couldn’t continue. Same for Ross Chastain and Clay Greenfield. John Hunter Nemechek stayed on the lead lap but fell victim to a flat tire as Stage 2 of the race came to an end with Sauter in the lead.

“I took a few hard hits out there,” said Gragson, who was unhurt in the wreck. “Just a bummer. I didn’t want to end the race like this, but I had a good time for the lap I got.

“Felt like the 29 (Briscoe) hit me in the wrong part of the bumper going through the tri-oval. It just got me loose, and it got pointed into the outside wall.”

In the final 60-lap stage, all four GMS Chevrolet pitted early on Lap 68. Though Spencer Gallagher and ultimate sixth-place finisher Scott Lagasse Jr. drew speeding penalties while exiting pit road, Sauter reclaimed the lead, with Grala trailing him, when Christopher Bell’s Toyota got loose in Turn 4, slowed and spun off the bumper of Timothy Peters’ Tundra.

Sauter, the defending series champion, looked to be in control of the race until John Hunter Nemechek’s spin off Turn 2 on Lap 95 of 100 caused the fifth and final caution and set up a chaotic two-lap run to the finish.

Wrecked on the backstretch, Sauter was credited with a 15th-place finish but collected two playoff points for winning both the first and second stages, each lasting 20 laps.

Bell, one of the preseason favorites for the championship, sustained heavy damage in three wrecks, including the last one, but his seemingly indestructible No. 4 Kyle Busch Motorsports Toyota Tundra made it to the finish line in eighth-place, salvaging a respectable result from a potentially disastrous night.

Check out the unofficial results of the NextEra Energy Resources 250 at Daytona.